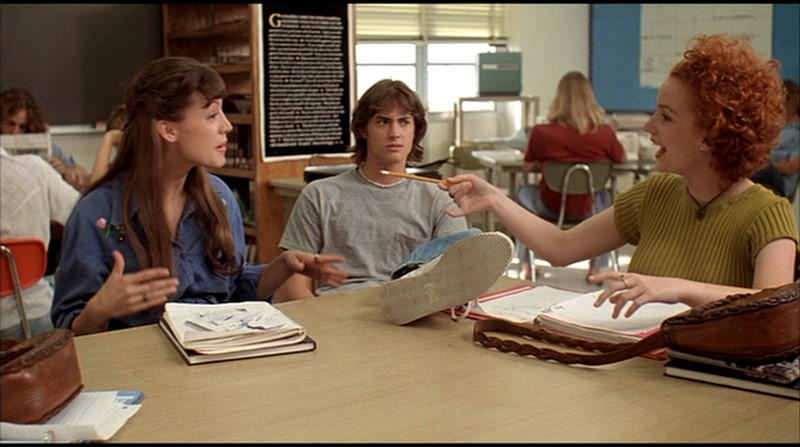 It’s been a rough week settling back into the Westport/Staples style of life after spending a week in the Guatemalan rain forests. Now with the summer weather, homework and school are feeling less important in my life. It’s more just an obstacle. High school doesn’t make much sense while you’re in it, or even after you’re done with it. Movies have tried best to understand the hell, the emotions, the awkwardness, and even humanity of these four years of childhood. Here now, are the top ten best movies about high school:
1. Dazed and Confused- What is the purpose of high school? What can you do to make it better? Dazed and Confused captures the high school experience all in one night from every angle: those new to it, those leaving, those staying, and those already out. It’s free flowing banter and plotless storyline captures those pointless moments as the greatest of our lives. Affleck and McCougnahey turn in career best performances for two actors who usually can’t act. Overall this film teaches you to believe that no matter what just say “I did the best I could when I was stuck in this place. Had as much fun as I could when I was stuck in this place.” When I’m stuck in this place, at least I’ll have Dazed and Confused to turn towards.
2. Superbad- It’s full of penis drawings and dirty porn talk but this isn’t just some crude teen sex comedy. This is near the closest that anyone will ever get to portraying the real high school experience. It’s about the kids who are never invited to a party rather than the ones who are. In most movies when outsiders attempt to become popular it always unrealistically works. Here, it just backfires. Despite all that, it’s such a moving look at how one strong bond of friendship can make everything better and the inevitable fate of disaster as it gets torn apart. And please tell me, how many times have you tried to flee someone in the hallway mid-conversation? Superbad knows your pain.
3. Fast Times at Ridgemont High- Two words: Sean Penn. Before he became so serious, Penn was Ridgemont’s Spicoli, a totally fried stoner who hits a shoe on his head and orders a pizza in class. Stretching over a full school year, the audience gets a truly intimate look at each characters lives and learns to love them, no matter their flaws. Their conflicts become our own. We too wonder what to do in the face of tests, dating and abortions.
4. The Breakfast Club- Adults don’t know us. They can’t tell us who we are. That is the timeless message of The Breakfast Club. John Hughes’s movie shows kids from each social class (jock, nerd, beauty, rebel, recluse) stuck together on a Saturday detention for different reasons. Every stereotype is totally shattered and the audience gets to understand that no matter how different these characters are they all share the same fears and troubles. It makes me wonder, could we ever get rid of our differences and all just get along? Deep down, we’re not so different.
5. Ferris Bueller’s Day Off- Bueller? Bueller? I can’t count the amount of times I’ve seen this movie, but it never gets old. I wish I was Ferris, someone who could enjoy life that much. But you can’t just blow threw life that easily. Every once in a while you’ve gotta stop and look around or you’ll miss something good. Even in the worst of times, there’s always a little fun to be had. Bueller?
6. Election- We all know kids have a hard time through school, but what about the teachers? Teachers may be torturing us…but we may be torturing them just as much. Alexander Payne’s spot-on satire of high school life is hilarious, truthful, and as painful as a movie can get. Payne’s film is about a teacher, who only wants to do the right thing as he tries to crush the school president election of a way too brainy girl. This is the closest I’ll ever get to understanding what goes through a teacher’s mind. The freeze frames, flashbacks and other directoral marks make the movie even funnier and yes, pretty perfect.
7. Rebel Without a Cause- The only drama on the list. The best of the only three films legend James Dean made before his untimely death. It’s a tragic and deeply moving look at teen angst. It’s a film that understands the mind of a teenager and that teen trouble and rebellion come from the world around them.
8. Juno- What can make high school worse? Getting pregnant. Juno isn’t as much exploring high school politics and cliques but just how one girl (Ellen Page) views the world around her. Juno is a girl who doesn’t follow the crowd and is her own person. She becomes a girl who’s forced to act like an adult too young even though she’s still pretty childish and therefore matures in the greatest way imaginable.
9. Donnie Darko- Well, it’s a dark psycological thriller about a schitzophrenic teen who sees a rabbit that tells him the world is going to end. But it also a hilarious satire on suburban and high school life. It explores censorship, English, and Physics. The funniest moment of possibly any high school film comes from this movie: Donnie tells his crazy bitch teacher to shove a book up her ass. Man, I wish I had the courage to do that.
10. Napoleon Dynamite- Some love it, some hate it. But me, I love it. It’s a classic revenge of the nerds story and the victory is as sweet as his dance moves. He may not be too popular but Napoleon doesn’t seem to mind. He’s just glad to be himself and to do what he wants. Life would be easier if we all listened to the words and thoughts of Napoleon Dynamite. Now, Vote for Pedro?

What’s your favorite high school film? Any others I forgot?