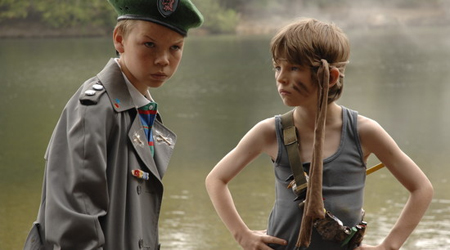 First off, let’s clear things off: Son of Rambow is not a sequel/prequel to the series of the beloved mumbling action hero. No, it’s a different kind of film. It’s the rare kind of comedy that everyone will like with an ending that could move even someone like me to tears.
Son of Rambow begins at a slow start, so don’t get too impatient. The film is set in a small but very religious British town. Will Proudfoot (Bill Milner) comes from a family where the Bible comes first. But in his own mind, his crazy fantasies and wild imagination rule. Lee Carter (Will Poulter) is a tough kid who can’t keep himself out of trouble. The two meet in the hallway and in order to repay a debt, Lee asks Will to help him make his movie. After watching First Blood, Will decides to contribute his own ideas for a story in which Rambo’s son goes to save him. Action! Adventure! Flying Dogs!(?)
At first, it seems as if the two boys couldn’t be anymore different. I’ll try not to ruin the movie but what I can say is that the bond that forms between the two is incredible and unbreakable. They teach each other the value of commitment. Lee almost uses his film not just for fun but as a way to make a friend. We see another side of a bully through Lee: he is actually a boy from a rough family and he has not a single friend until Will comes around.
Son of Rambow can fit into the category of “quirky” comedies. Some people think being quirky is a bad thing but me, I think its great. Many of the things that happen in this film are not what you’d see everyday (a flying dog) but it’s captivating and hilarious. And it makes you wonder, who’d have ever thought of something like that?
There’s a great deal of good comedies out in theaters right now. If you want you can go with the dirtier option of Forgetting Sarah Marshall or Harold and Kumar or the more family oriented Son of Rambo. Despite their differnces all three movies are very similar in theme. They all are about the meaning of commitment, true friendship, and the things in life that make one realize it’s time to mature. This seems to be a new territory being explored in comedy nowadays and it should be. That is because, despite the cruelties, growing up and finding true friendship is too ridiculous to be taken seriously. We’ve gotta learn to laugh every once in a while.