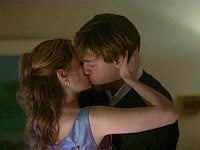 Well, now is about the time of year when I reflect on the best things to come out of 2008. However, it is difficult to write a final consensus on movies since all of the so called Oscar flicks are too good for the suburbs and are currently only playing in NY and LA. However, you can watch a television show anytime, no matter where you live. So while I wait to report this year’s best movie, I’d like to present the year’s best TV moment.

I had a wide range to choose from, but I decided to go for a now legendary moment from the season 5 premiere of “The Office” entitled “Weight Loss.”
You guessed it; it was Jim’s (John Krasinski) proposal to Pam (Jenna Fischer). Not just the fact that it was one of the most anticipated moments of the show since Jim first laid that smooch on Pam at the end of season 2, but the brilliant way it is filmed and approached.
First off, rather than setting the proposal in some typical, romantic, cliche setting like a five star restaurant or tropical resort, this special proposal is set on a dark, rainy day at a gas station off of the highway somewhere in between Scranton and New York. It’s not filmed right in their faces, but instead off in the distance, as if the camera is spying from a safe distance of this moment.
“Hey! This is not halfway,” an overexcited Pam states.
The rest of her words are hard to determine.
Amongst her excitement, Jim just stands there, silent. Is he angry? Sad? Suddenly, he gets down on one knee, and the viewer’s heart races a few beats.
“I couldn’t wait…will you marry me?” Jim says.
“Oh my God,” Pam repeats. And so does the audience.
Of course she says yes. But, that’s not the point. Everyway this scene was approached made it so original and so surprising. Everytime I watch it, I get chills and a big smile on my face.
Paul Feig (creator of “Freaks and Geeks”), who directed this episode, has become the Hemingway of television comedy with his simple and honest approach to such complex events, making them all the more powerful.
Long time fans will cry when they see this, and even people who’ve never watched “The Office” once might feel something.
Here is the clip in all of its glory:
Share on Tumblr