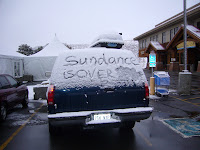 Okay, I’m not back in Westport yet. However, today was my official final day at Sundance. And what a bitter goodbye it will be. I will get to the overall reflections of the Festival in a little bit. First off, let’s reflect on the last day.

Last night, the Sundance award winners were announced. This morning, I attended the World Dramatic Winner. It was a Latin American film called “The Maid.” It tells the story of a tired, old maid working for an upper class Chilean family. She considers herself part of the family but as the family hires new maids to help her out, she begins to feel more and more alienated. I have mixed thoughts on the movie. It was an interesting and very relevant idea for sure. However, the execution could’ve been much better. The movie only runs around 90 min but feels close to 2 1/2 hours. The film doesn’t really get interesting until its final act, but the payoff in the end makes the whole film worth it. The true highlight of the film is the performance by Catalina Saavedra as the subject of the film, Raquel the maid. She brings complexity and a surprising amount of humor to the character by showing barely any emotion, not even a smile or frown (until the end). In this light, Saavedra’s performance evoked Richard Jenkins’s performance in “The Visitor.”
The second film I saw today, the Dramatic Prize Winner, I have no doubts about but only absolute praise. That movie is “Push.” “Push” is an emotionally devastating drama that is both extremely depressing yet uplifting at the same time.
“Push” takes place in Harlem in the late 1980s. The story revolves around Precious (Gabby Sidibe), an overweight black teenager. She lives on welfare with her father, who rapes her, and her mother (Mo’Nique) who abuses her both physically and emotionally. The film is so realistic and some scenes so painful that at times you want to leave the theatre but you want to stay and find out what happens to Precious in the end.
What shocked me the most about “Push” was the performance by Mo’Nique. Mo’Nique is usually known as a stand up comedian in such works as “Phat Girlz.” She totally transforms herself in this film as a monster who goes on shockingly long rants against her daughter that are so incredibly insulting. Despite the horrible things about her character, you still feel slightly bad for her in the end. It may be a little early, but I am officially starting my campaign for Mo’Nique as Best Acress Nominee for the 2009 Oscars. Her performance simply won’t leave my head and is the kind of performance the Oscars were made for.
So, now I say goodbye to the Festival. It is a day that is mainly bitter, but not sweet. I learned so much from Sundance. I realized the true difference between independent and mainstream cinema. I saw some films you’d never see in a theatre near you, films that were funny, devastating, strange, and most of all, daring. The filmmakers at Sundance are there to carry out their dreams and do whatever they can to protect their artistic visions. And to protect and express their artistic visions, they do that well.
Here is the order (from best to worst) of the movies I saw at Sundance:
1. Dare
2. Push
3. Paper Heart
4. We Live in Public
5. Spring Breakdown
6. Mary and Max
7. Humpday
8. The Maid
Share on Tumblr