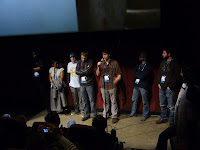 One of the many expectations I had for Sundance (besides meeting Michael Cera) was that it would snow every single moment of every single day. However, it was quite warm this week and the closest we got to snow was rain. So today I gave up on the idea of snow as I gave up on the idea that Amy Poehler would ever come back to the Festival. I decided to trade in my boots for my more comfortable Converses. I went to see a movie, wearing my Converses, and not long after a movie, Sundance was hit with its first snow storm of 2009. It would’ve been nice if I had my boots…but I digress.

I began my day not with a feature length movie but a series of shorts. The shorts worked kind of like an episode of “Saturday Night Live”: the ones  that were good were really, really good and the ones that were bad were pretty awful. The top short film was “Asshole” which was simply a comedy about a guy with sleeping and other very unnatural issues going to a doctor and explaining his issues in a very Asshole way. It is a tiny, hilarious gem of improvisation. That one scene wouldn’t have worked well as one full feature but the character from the movie certain deserves his own film.
The bottom of the short film barrel was “The Dirty Ones.” It was dull and meandering with some of the most artificial dialogue I’ve seen in a movie. The story would’ve been great in a full feature length film, but the writing needed some major improvement.
Another great short film was the surreal Australian “Miracle Fish.” The ominous shadows and camera work brought back memories of “The Shining.” In this light, director Luke Doolan has the potential to be another Stanley Kubrick. I had the honor of sitting next to Doolan during the short films and he answered an important question for me; Australians do enjoy “Summer Heights High” and they do find Jonah extremely offensive.
Later on, I went to see the highly talked about claymation picture “Mary and Max.” The film tells the story of a lonely 8-year-old Australian girl Mary* (Toni Collette) who lives with her workaholic father and alcoholic mother. She writes a letter to a man in New York named Max (Phillip Seymour Hoffman). Max turns out to be a reclusive, obese Jewish man with Asberger’s Syndrome. They mail each other for years and develop a strong overseas friendship through the good and bad times.
Does “Mary and Max” deserve all of the praise it has been getting? Yes. My one problem with it is that it dragged on a little too long but besides that it was nearly flawless. It contains absolutely brilliant comedy and a large amount of tragedy. Despite the fact that it was an animated claymation film, it is far from a kids movie. It’s humor will most likely not be understood by younger kids. I do believe though, that “Mary and Max” is already a strong contender for best animated film next year.
Later on, I treated myself to a nice sushi dinner where I tried all kinds of new fish. I sat at the bar and chatted with producing couple Elana Krausz and Chris Dimassis. Hopefully, the over indulgence of sushi I consumed won’t turn me into Jeremy Piven.
Tonight, the award winners were announced. Tommorow, I will be seeing winners “Push” and “The Maid” for my final day at the festival. Oh God. The tears are coming! The tears are coming!
*Two different references to the continent of Australia! In one post? Woot!
Share on Tumblr