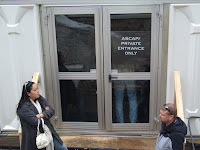 Today started early, but on a much cheerier note than yesterday. I arose before the sun did in order to get a good spot in the ticket line. My spot was decent, but thank God for ticket scalpers. Because of them, I was able to get myself a “Spring Breakdown” ticket (more on that movie will follow). I then purchased a ticket to the 11:30 PM showing of “Dare” tonight. Because of the late timing, my reaction to that movie will be in tomorrow’s post.

During the day, I went to a New Frontier exhibition. I saw a series of short films, met students (both college and high school) from across the country, and saw the future of editing films.
My lunch wasn’t as exciting as yesterday’s when I met and chatted with Ms. Hughes. It was an ordinary, quiet lunch. But afterwards was when the excitement came. As I walked up and down Main Street, searching for celebrities and industry insiders, I came across a tent. In the tent, stars like Woody Harrelson, Josh Brolin, Marisa Tomei, and Robert Redford read off from “Voices of American History” (which, I have no doubt in my mind, is the work of Howard Zinn. Unfortunately, I could not get in but I watched the action from afar and even got glimpses of a few faces.
I decided the only way I’d ever see any of these stars up close was to wait for them to leave. So, I proceeded to the back exit door and waited for the show to end so I could snap a few photos. I felt like a paparazzo. Indeed, two paparazzo stood at the side door waiting as well, hoping to take a few good photos. They were both slightly overweight, one was mild-mannered but the other was a stereotypical, obnoxious member of the paparazzi cult. He triumphed in getting footage of Michael Cera and Makuley Culkin while say that they were a bunch of d**ks. I stood and waited and waited. I realized then that I understood what it was like to be a paparazzo. They stand and wait for a famous person to walk by, stick a camera in their face, and then sell it for money. Sounds kind of pathetic, but i still like taking pictures of famous people.
I unfortunately never got those photos because I had to rush to “Spring Breakdown.” “Breakdown” was not as good as “Paper Heart” and felt pretty predictable at parts, but it was still a joy to watch and a slight diamond in the rough of a comedy. The story revolves around the lives of three best friends (Amy Poehler, Parker Posey, Rachel Dratch) who have lived as outsiders since college. One of them is forced to go on assignment for the senator she works for to keep her college daughter safe while she is on spring break. The trio, hitting a mid-life crisis, decide to go down together and redeem themselves for the years of fun they missed in college.
The story is the classic revenge of the nerds premise but from the female perspective. From the female rather than male perspective, it allows the film to parody the treatment of women in society. Most of the jokes hit, and the film boasts a fantastic cast of both recognizable and unrecognizable stars. Unfortunately, it is going straight to DVD. It makes me sad when studios will pick up a comedy like “Pink Panther 2″ and leave something as funny and original as “Spring Breakdown” to rot in direct to DVD infamy. Hopefully, some people will discover it and enjoy it while ignoring the fact that it pretty much had the same fate as something like “Friday the 13th XXXXVVVIIIII.” That number might be wrong though. I’m sure they’ve made more.
Since today was the Oscars I feel like I have to comment on it. I am glad for the victories of “Slumdog” and “Milk” as I put “Benjamin Button” and “Frost/Nixon” on my to list. Meanwhile, it is a shame “The Reader” got a best picture nod over so many other great movies this year (“The Dark Knight” or even “Tropic Thunder” deserved that spot). I am thrilled though to see Mickey Rourke in the running and “In Bruges” as well. The best song category is probably the worst. Although all three of the songs chosen were great, the Academy could’ve filled the other two spots. Bruce Springstein’s “The Wrestler” song being snubbed is outrageous. Also, showing a little love to “Forgetting Sarah Marshall”‘s three genius original songs, “Inside of You,” “Do Something” and “Dracula’s Lament” all deserved recognition. But unfortunately, I do not run the Academy.
So now I rest, and maybe do some homework or watch “Lost” (I’m leaning towards the latter) to prepare for my very late showing tonight.
Share on Tumblr