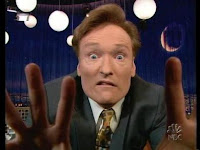 This is your last chance everyone to see Conan at his very best. I’m not saying that Conan won’t do well on “Tonight Show,” but he definitely won’t be able to display some of his best routines that he could with a 12:37 time slot.
That being said, tonight is the last night ever we get to see Conan at 12:37. It’ll be a sad night, but at least Conan’s not gone for good. Unfortunately, I now have to choose between two shows to watch at 11:35: Conan or Colbert. And believe me, it’s not an easy decision.
Soon, Jimmy Fallon will be taking over Conan’s slot on “Late Night.” Will he be good? I can already say he won’t be as good as Conan, but I’m keeping hope alive and wishing him success. Fallon has proved he’s good at zingers and punchlines with his stint on Weekend Update on “SNL.” So Jimmy, do Conan well. I hope you do.
Below is a clip of one of Conan’s very best shows. All I can say is, I hope Triumph’s coming to LA, also:
Conan Obrien and Triumph on Star Wars @ Yahoo! Video
Share on Tumblr