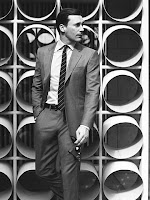 Jon Hamm can be serious (“Mad Men”)*. Jon Hamm can be funny (“30 Rock”). Now, he’s seriously funny as Lex Luther in this parody of the current financial crisis from “Funny or Die.” I was going to use this space to discuss my thoughts on Jon Stewart vs. Jim Cramer on “The Daily Show” last night but I feel like so much has been written about it that there’s little left for me to say except, well done Stewart. It’s early in the year but I already think you may be destined for an Emmy, a Peabody Award, or a Nobel Peace Prize, perhaps. Anyway, enjoy this clip. And I seriously believe that once “Mad Men” ends (hopefully not soon) Jon Hamm should pursue a career in comedy. He could make it: