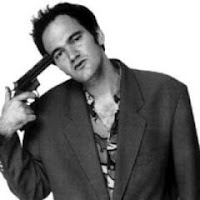 It’s been five years since Quentin Tarantino’s last feature length film, “Kill Bill: Volume 2″ and two years since he collaborated with Robert Rodriguez on “Grindhouse.” Now, the brilliant auteur who likes to take long breaks is finally back, with a film carrying the gloriously misspelled title of “Inglourious Basterds.” Why is the title misspelled? This is one thing I cannot comprehend about Quentin’s new movie. However, I can determine many things about this movie from merely viewing the trailer.

First off, “Basterds” is somewhat of a departure from form for Tarantino. This film leaves sunny souther California for Nazi-occupied France during WWII. It tells the story from a troop of Jewish American soldiers.
The cast of the film is even more perplexing than the title. The cast includes Brad Pitt, B.J. Novak (“The Office”), Samm Levine (a.k.a Neil Schweiber on “Freaks and Geeks”), and…Mike Myers. Quentin is known for re-launching the careers of many stars (John Travolta, Pam Grier, David Carridine, etc), so maybe he can make America forget that Myers ever made “The Love Guru.”
The best thing to be said about the cast is that Samuel L. Jackson is listed as the narrator. Hopefully, Quentin will give him a few Bible verses to read along with some “motherf—ers” to shout.
Mainly, “Inglourious Basterds” looks more like a throwback to the movies Quentin grew up with than a war movie on the same line as “Saving Private Ryan.” It seems more like a simple story of a bunch of pissed off Jews looking to murder some Nazis. But this isn’t necessarily a bad thing. Tarantino has a way of pulling out such themes about the meaning of life and the value of forgiveness out of such simple ideas as revenge is bad, there’s more to life than money, and stealing is wrong. Using his massive knowledge of pop culture, Tarantino will hopefully find something new out of the theme likely encompassing this story: war is hell.
I personally could not be more excited for this. Every time Quentin releases a new movie, it is an experience that shouldn’t be neglected. His character driven stories and complex and hilariously pop culture driven dialogue have made Quentin among the greatest writer-directors in Hollywood.
Coming out August 21. Here’s the trailer:
Share on Tumblr