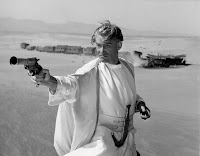 “Lawrence of Arabia” is a biopic about T.E. Lawrence. The first scene is visual trickery; it begins with a not-so old T.E. Lawrence (Peter O’Toole) crashing his motorcycle. Within five minutes, the main character has died. Before he crashes, he looks so young. Even in his short life, he achieved more than most humans have in their entire lives.
Lawrence was a British poet and lieutenant. During World War I, Lawrence helped lead the Arabs to fight off the invading Turks of the Ottoman Empire. With all of the strife today in the Middle East, the film feels all too relevant. It is one that may contain some great wisdom to deal with the region.
But, forget about politics for now. What really needs to be focused on is every technical aspect of this film. First off, there is the cinematography, which ranks among the best in film history. Director of photography Freddie Young makes you feel like you’re right there in the desert with the troops. The aerial shots combined with a sweeping musical score is nothing short of awe inspiring. Seeing thousands of camels from the sky is almost more powerful than being right there on the ground with them.
Another of the film’s most impressive feats is its editing. The best transition ever in a movie is in “2001: A Space Odyssey” when a bone flung in the air suddenly turns into space station way into the future. Millions of years of human progress was covered in one tiny leap. The second best transition ever comes from “Lawrence of Arabia.” It is when a small lit match suddenly turns into the rising sun over the desert; a sunrise that makes the sky look literally on fire. One small flame turns into a giant overwhelming fire; one man will lead an army to unimaginable results.
There are too many other classic moments in this film to recount. Omar Sharif walking out of a mirage. The train crash. And the final battle.
Of course, the movie has its flaws. It is filled with historical inaccuracies, exaggerations, and racism (don’t get me started on Anthony Quinn in brown face). In a worse movie like say, “300,” all of the inaccuracies would’ve bothered me to an extreme. But because “Lawrence of Arabia” is such an incredible achievement in filmmaking, all of those inaccuracies seem miniscule amid the gigantic scope of the film.
The definition of an epic film today seems to be a movie that consists of giant battle sequences that include a crusading hero giving an uplifting speech. Of the movie’s nearly four hour running time, barely thirty minutes of it consists of battle scenes. What makes the film epic is its scope in nearly every aspect. The directing, cinematography, and editing set up a larger than life story. Even O’Toole’s portrayal of Lawrence is epic. He adds more conflict and mixed emotions to his character than any actor I’ve seen. “Lawrence of Arabia” reminds us of the endless limits a film can go, even without the help of computer technology
Recommended for Fans Of: Lord of the Rings, Gladiator, There Will Be Blood, 2001: A Space Odyssey, Barry Lyndon, Once Upon a Time in the West, Seven Samurai, The Searchers, Anything by Steven Speilberg
Here are what two of the film’s surviving cast members (who sound an awful lot like the Jonas Brothers when they sing) have to say about “Lawrence of Arabia”:
Share on Tumblr