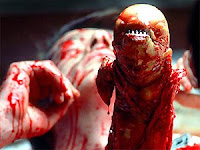 Ever heard the expression “if it ain’t broke, don’t fix it”? Well, nobody ever told 20th Century Fox that. The studio plans to make a remake of the 1979 classic “Alien” (despite the countless sequels in recent years that no one saw).

What is the reasoning for this? “Alien” has just hit the 30 year mark this year, and the FX and frights still hold up well. The sight of the alien popping out of that man’s stomach is still as shocking and terrifying today as it ever was.
Why is it that studios can’t come up with original horror or sci-fi blockbusters anymore? It’s not as hard as one may think; there are no doubt hundreds of out-of-work screenwriters who’d be more than willing to share their ideas. For once, will they listen?
The film will reportedly be co-produced by Ridley Scott. Scott, a pioneer of the modern sci-fi genre, directed the original “Alien.” Why is he remaking his own masterpiece? Doesn’t the man behind “Blade Runner” and “American Gangster” have any better ideas up his sleeve?
Read More About It Here
Share on Tumblr