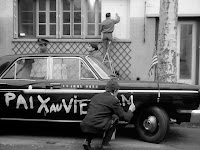 They also could have called this “Brief Interviews With a Series of Various French Women about America, ‘Nam, and Socialism.” But, the film is not just about the women. It’s about the men as well. And the battle between the man, the woman, and the world is the central idea inside this peculiar French New Wave movie.
“Masculin/Feminin,” was filmed in the mid 1960s. As mentioned before, the film was an entry of the French New Wave movement. It takes place among hip bars, back allies, and areas outside of upper middle class homes. It centers around a group of young rebellious men and women of the Paris counterculture.
Like any New Wave film, “Masculin/Feminin” is really plotless. It’s connected literally by a string of sentences, thoughts, and ideas. Of the many characters who come in and out, the film mostly centers around the relationship between revolutionary Paul (Jean-Pierre Leaud) and Madeleine (Chantal Goya), a Beatles hipster pop singer. The film chronicles the years of their rocky relationship through their many interactions with others. And that’s pretty much it; a concept spread throughout 1 hour and 45 minutes.
“Masculin/Feminin” is directed by Jean-Luc Godard with a sense of utter confusion and curiosity. The French New Wave was really a response to the social and political changes of the time, and Godard embodies this fully. The character’s conversations are aimless, not really discussing plot-changing issues, but rather life. They discuss social issues. They discuss the importance of unions. They discuss the importance of coca cola. They listen to French pop. They talk about the Beatles. The film all in all reflects that Post WWII era, a time of a crisis in French pride and a collision of culture. The world of Europe was meeting the world of America.
The sentences, thoughts, and ideas that connect each strand of the story vary. Some involve characters reading lines of poetry. Others express short narratives and anecdotes. Mainly though, the conversations are caught by Paul asking women questions. As he asks, he’s almost always off screen. This makes it seem a little more objective, a little cold, and a little unfriendly. Maybe it’s the way the characters seem more and more isolated from each other under the confusion of culture.
Like in Francois Truffaut’s “The 400 Blows,” Godard dares to focus on the stories of those who are rarely heard. In fact, the characters themselves seem to spend their days trying to stray far away from the bourgeois lifestyles they were born into.
Technically, Godard breaks many conventional rules of cinema in this film. The characters directly address the screen (and are fully aware that they are in a film), there is a movie within a movie, and the soundtrack includes pop songs that come directly from the plot itself. Many seem to believe “The Graduate” was the first movie to use a pop soundtrack rather than a traditional one. However, I believe “Masculin/Feminin” broke that ground first.
“Masculin/Feminin” is not as strangely moving and emotional as “The 400 Blows;” the characters (as well as whatever plot there is) seem a little discombobulated. But despite its small flaws, “Masculin/Feminin” is a great film to admire in it’s pure audacity to disobey every rule of cinema. Ultimately, it’s the ability to sometimes disobey the rules that can really determine greatness.
Share on Tumblr