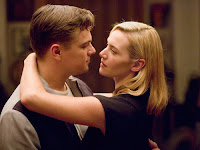 American suburbia has been a subject of fascination for Hollywood for years. Why is that? Is it that the idea, besides being abundant, seems almost mythical at this point? Like it’s the kind of thing that it seems everyone has yet everyone doesn’t really have at the same time.

This is a fascinating idea. It is one that is continued to be explored, not necessarily in the most original way, in Sam Mendes’ “Revolutionary Road.”
“Revolutionary Road” comes from a novel written by Richard Yates. It is set to the backdrop of 1960s suburban Connecticut. Frank Wheeler (Leonardo DiCaprio) is a longshoreman looking for more in his life. April (Kate Winslet) is a struggling actress. At a young age, they meet at a Manhattan party and after some talking and dancing, they fall in love.
Flash forward to a few years later, Frank and April are now in their early 30s. They live in a typical, white box of a suburban home with two kids. Frank now has a desk job and April is a housewife.
And if you’ve ever seen any other movie about suburbia, you know the two are unhappy. There’s little love in their marriage, and they realize their suburban life style has turned into nothing but a dull cycle. Sounds very similar to Mendes’ great masterpiece about the suburban nightmare, “American Beauty.” However, this time, the wife has the sort of awakening that prompts her to rebel.
So, her idea of breaking free? Moving the family to Paris where she can work and Frank can find out who he really is. This dream almost seems like a reality, but a few barriers lay in the way.
As mentioned, the film contains eery similarities to “American Beauty,” which can be a good thing, or bad thing. Like “American Beauty,” it plays with the notion that society’s definition of happiness is actually misery. It is possible that the life we all want is not really the path we are destined for. It is those bold few that actually try to follow their real dreams that are really the bravest.
Unlike “American Beauty” though, “Revolutionary Road” lacks some of the deeper symbolic subtlety. Also, it is not as darkly witty, and the characters are nowhere near as fully developed. By the end of “American Beauty,” Lester felt like a real human being and Carolyn could be forgiven for all of her psychotic wrongdoings. In “Revolutionary Road,” the film seems almost entirely in favor of April while at times being unsympathetic to Frank. But maybe that’s because he was horribly tempted by the idea of money.
“Revolutionary Road” lacks subtlety. At times, the dialogue seems to blurt out all of the messages that the viewers should try to figure out on their own. The film ends up being more tell than show, which brings it down to cliches and artificiality. This lack of subtlety is something that unfortunately plagues a lot of the work of Sam Mendes.
“Revolutionary Road” is no doubt bolstered by its many fine young actors, who sometimes help shield the weaker parts of the screenplay. The film marks the first time in over a decade that DiCaprio and Winslet starred in a movie together. The last time of course was “Titanic.” They sizzle with a fine amount of chemistry that makes them seem both in love and absolutely anathema to each other at just the right moments. Their chemistry works best perhaps, in one scene when ironically they have absolutely no love or even like for each other. It is brilliant acting in both the part of DiCaprio and Winslet, but especially for Winslet.
Another great performance in the film comes from Michael Shannon, who plays a man just released from a mental institution. However, being institutionalized has only made him crazier. Or at least, crazy in the eyes of some. Like the movie tries to make you believe, perhaps insanity is the truest form of happiness.
The movie is not fully realized until maybe the last 20 minutes. The aforementioned scene where DiCaprio and Winslet sit at breakfast, engaging in what seems like normal conversation but is actually them totally out of love in each other, is both touching and heartbreaking. It shows that Frank and April have finally become the suburban stereotype that they so hate. This scene puts a new spin on the rest of the movie and makes it seem like everything that happened before was perhaps a very bad dream, or just a glimpse of what will happen when one tries to achieve an impossible fantasy. But then again, is this fantasy really impossible? The film never really seems to decide which way it’s going to go, and that kind of gives it a mirky and unsatisfying feeling.
The film then goes on a little too long. It misses the perfect place to end and then ends in a spot that seems a little strange and irrelevant. Why Mendes did this, I can’t see. In “American Beauty,” we truly saw why Lester and Caroyln wanted to escape their suburban nightmare. In “Revolutionary Road,” it seems at times that Frank and April are just complaining. But I don’t want to watch people complain for two hours. I want to see them actually do something about it.
Share on Tumblr