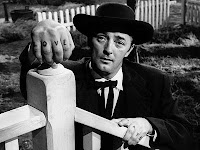 Of all the characters I’ve ever been acquainted with, perhaps the most odd, eccentric, and engrossing is Harry Powell (Robert Mitchum). This mystery of a man is the subject of Charles Laughton’s mesmerizing “The Night of the Hunter.”

Who exactly is Harry Powell? He is a self-proclaimed preacher and a religious fanatic. He recites Bible quotes while explaining the battle of love vs. hate using his tattooed hands (which has become one of those things that’s so famous yet few even know what it’s from). Despite his righteous message, Powell is not so righteous himself. Powell lands himself in jail and discovers Ben Harper (Peter Graves), a man on death row for murder and stealing $10,000.
Powell uses his seemingly moral goodness to con himself into marriage with Harper’s wife (Shelley Winters). Everyone is seduced by Powell, even Harper’s two children, whose disdain for Powell grows overtime.
The film soon unfolds into a psychological thriller, as Powell reveals he is not all that he seems, but rather a very dangerous man. Like something out of 1940s film noir, money becomes the thing that drives the characters and sends the two Harper children on a wild goose chase. But, as Powell keeps claiming, it’s all in the name of God.
“The Night of the Hunter” doesn’t have a real voiceover narration, but the character Rachel Cooper (Lillian Gish), who serves as a sort of on-screen narrator. She provides the true morality that Harry Powell lacks and fills the film with Biblical references. Most important to look out for is her reference to “the wolf in sheep’s skin.” I think you can guess who that’s about.
The film is guided by the powerhouse performance of Robert Mitchum. He controls Powell perfectly and makes him sane and insane at all the right moments, creating the false illusion of Powell as a righteous man. He has a warm singing voice that sounds something like Gene Kelly and a cold gaze that could kill a puppy. His explanation of the battle of love vs. hate is one that is worth multiple listens. Mitchum fits the character so well that I could never picture anyone else playing this role.
“The Night of the Hunter” came out in 1955. By this time, color was available to movies for 16 years. “The Night of the Hunter” could have been shot in color, but Laughton decided to stick to black and white. He did so with good reason. The black and white fits perfectly and cinematographer Stanley Cortez takes full advantage of it by creating immense, creeping shadows that add to the film’s suspense. Some of the film’s most beautiful shots are the outline of a person, shrouded in shadow, standing against an open doorway. There’s also a fine transition that literally goes between night and day, perhaps an allusion to God creating the Earth and the skies.
Obviously, the film carries a heavy religious message. At times, it can seem very anti-religious, portraying people of faith as false prophets praying off the gullible. At other times however, the film can also be very pro-religious, portraying religion as a source of morality and wisdom. However, that’s not up to “The Night of the Hunter” to decide, it’s up to the audience.
Upon its release, “The Night of the Hunter” was a failure both critically and commercially. It took years for the film to finally be appreciated as a masterpiece. Today, it has inspired filmmakers far and wide. Individual shots and snippets of dialogue from the film could be directly related to films by Martin Scorsese, Quentin Tarantino, The Coen Brothers, and Spike Lee (quite obviously in “Do the Right Thing”).
“The Night of the Hunter” is a little bit of Hitchockian suspense mixed with “The Maltese Falcon” and the Bible. It’s a film that was years ahead of its time and now it has finally gotten its due.
Recommended for Fans of: Psycho, No Country for Old Men, The Maltese Falcon, Do the Right Thing, Fargo, The Big Lebowski, Jackie Brown
Share on Tumblr