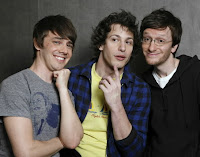 The MTV Movie Awards are still going on as I write, and even though they haven’t ended yet, I must tell you that I am both shocked and offended.

Last year, I expressed anger and annoyance towards the ceremony for awarding Michael Bay. This year, I had high hopes for the awards. There was a wide range of good nominations, including a Best Picture winner (“Slumdog Millionaire”). The ceremony hasn’t ended yet, but I can tell you right now that “Twilight” will, without a doubt, be carrying home the Best Movie prize. Why? Because, it’s “Twilight.” More on that later.
One bright spot of the ceremony was host Andy Samberg. Samberg did his best to make it seem like he was having a good time, and lightened the mood with his great comic abilities. His opening sequence, spoofing this year’s biggest movies was nothing short of hilarious (besides the constant cheering every time the name Robert Pattinson was mentioned). Also worth mentioning was the group of Grammy winners who sang quips from the many great songs from The Lonely Island, followed by Forest Whitaker singing “D–k In A Box.”
The hosting wasn’t the problem, it was the awards themselves. For you see, the MTV Movie Awards don’t award talent, they award popularity. How else could you explain a fight scene from “Twilight” beating both fight scenes from “Pineapple Express” and “The Dark Knight”? How else could you explain Robert Pattinson winning best newcomer over Dev Patel from “Slumdog” (who nearly got an Oscar nomination), or the real best newcomer of the year, Bobb’e J. Thompson (“Role Models”)?
Another great atrocity: The Boss, Bruce Springsteen, and his masterful “The Wrestler” losing to Miley Cyrus? Clearly, America does not know talent.
There is not much more to convey than disappointment. MTV, the network once responsible for “Beavis & Butthead” and great music, has died. A new MTV has been born, an MTV that lives and breathes off of the lowest forms of entertainment. I know the MTV Movie Awards are not to be taken too seriously, but it is one of few awards shows that the people, not random voters, vote for. So I ask now: why don’t the American people have better taste in movies?
Note: I cannot emphasize this further; this piece is not at all meant to attack the comedy of Andy Samberg. He has been totally vindicated from the criticism presented in this article.
Share on Tumblr