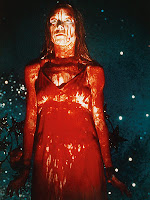 With all your power, what would you do?

-The Flaming Lips
“Carrie” is no ordinary horror film. “Carrie” doesn’t frighten the audience by making people jump out of the dark. It doesn’t frighten the audience by taking lives every five seconds. It frightens the audience simply by building up and up to one of the most thrilling and tragic finales ever shot on film.
“Carrie,” at its heart, is a high school movie. And it’s not a happy, funny, or uplifting one at that. However, I could see someone somehow viewing it that way.
The Carrie used in the title is Carrie White (Sissy Spacek), who is currently a senior in high school. Imagine the worst thing that’s ever happened to you in high school. Now times that experience by ten. Now imagine yourself going through that every day of your life. Now imagine Carrie’s life.
Carrie is quite possibly the least popular girl in school. Her face covered by long locks of hair, she manages to be bullied by nearly every student in school. To top it all off, she must go home everyday to her mother (Piper Laurie) who is nothing short of a Christ fanatic. If she was any crazier, she’d be a Black Death era flagellant.
Then one day, as the torment gets worse, Carrie’s body begins to change. She soon finds that she is telekinetic; she has the power to move objects with her mind. It seems only like a thought at first, but after a while, Carrie is ready to use her newly found ability as a weapon of vengeance.
Besides the stuff with the superpowers, “Carrie” doesn’t at all seem like it was made to be a horror film. With a different director and a few different twists, the film could’ve just been a dark drama. But director Brian De Palma took “Carrie” and directed it as a Hitchcockian thriller. Many try to emulate the great Alfred Hitchcock, but few succeed. De Palma is one of the few that actually does. Many shots out of “Carrie” seem directly out of Hitchcock films. The score blares the sounds heard as Janet Leigh was stabbed in the shower in “Psycho.” Bright colors flash on the screen that often make the film seem like an hallucination, a la Jimmy Stewart in “Vertigo.”
One technique De Palma often uses that might be a Hitchcockian technique, or if not, just a fine one are the constant zoom-ins to character’s distraught faces. It is an almost perfect technique for this film. Carrie is a very isolated character. By zooming in from far, it is almost as if we’re feeling her isolation, that distance from everyone who loathes her so much. Then by zooming in, we see who she really is, and realize there is more to this silent soul than meets the eye. Something very frightening.
As previously mentioned, “Carrie” is a horror film that doesn’t act like a horror film. It is actually the best kind of horror film; it is one that uses camera angles and songs, rather than blood and gore, to produce thrills. And what we get are not light thrills that leave you in a second, they are thrills that run through throughout the entire film. Even the first time viewer can guess what will happen in the finale, but you still feel so frightened because you know it will happen but you don’t want to see it unfold. But then again, you kind of do.
Carrie is played to near perfection by Sissy Spacek, who received a well-deserved Oscar nomination for her role. She plays Carrie to a silent, awkward perfection. It is that silence that truly makes up the character. Even while committing her gruesome revenge, Carrie’s lips remain sealed. She seems neither happy nor upset at what she’s doing.
Rapped in all of the horror, maybe “Carrie” is just a giant punch line. And what is the punch line? Simply that there is nothing more horrifying than high school. The saddest part of the story is Carrie’s horrible mistreatment, and the famous finale is not just scary; it’s also nothing short of a tragedy. What drives people to behave this way? What makes them mistreat those who perhaps just want a friend?
“Carrie” is one of the best horror films ever made, especially in the ever popular teen horror film. It is the model for a great horror film that is sadly rarely followed today. It’s a model because it isn’t exploitative, it’s not gruesome to a point where it isn’t even scary, and most importantly, it takes it time. It saves the best thrills for last and it doesn’t disappoint. If I learned one lesson from “Carrie,” it’s that horror, like comedy, takes time.
Recommended For Fans Of: Rosemary’s Baby, American Beauty, Silence of the Lambs, Scarface, Carlito’s Way, The Untouchables, Psycho, Rear Window, Vertigo, Kill Bill, Deliverance
Share on Tumblr