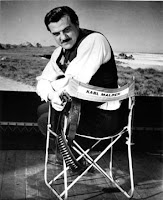 Off the heals of the deaths of Ed McMahon, Farrah Fawcett, Michael Jackson, and Billy Mays, Hollywood lost another one of its finest. Karl Malden, an Oscar and Emmy winning actor died today of natural causes. He was 97.

Malden’s legacy reaches the movie screen, the TV screen, and the stage as well. He is perhaps best known for his performance as Lt. Mike Stone in the 70s TV series “The Streets of San Francisco.” From film, he is best known for his performance in the timeless 1954 classic, “On the Waterfront.” In that movie, he played Father Barry, one of the few decent men in a corrupt world, trying to bring a sense of morality to Marlon Brando’s Terry Malloy.
Malden also starred in classics such as “Baby Doll,” “How the West was Won,” and “Patton.” Even though Brando managed to steal the thunder from every other actor in “A Streetcar Named Desire,” you can’t forget that Malden won best supporting actor for his performance in the film. Once again, he gave a fantastic performance of a man trying to bring a little joy and goodness to a wretched life.
During a career that lasted for nearly 70 years, Malden proved himself a worthy addition to some of the greatest movies ever made.
Share on Tumblr