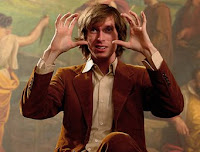 Today marked the exciting return of not one, but two* of the greatest directors of all time: Joel & Ethan Coen and Wes Anderson. Trailers for their latest films were released today.
The Coen Brothers will be returning with a film called “A Serious Man.” The trailer doesn’t give much of a plot, besides the fact that the main character is Larry Gopnick (Michael Stuhlbarg). Larry’s story is told to the soundtrack of the noise his head makes while being banged against a chalkboard. Larry is a university professor seeking help from multiple rabbis after his marriage, job, and sanity get into major trouble.
The character of Larry seems like the Coen Brothers’ The Dude and Llewelyn Moss–just a normal guy in the wrong place at the wrong time. With this movie, it looks like The Coen Brothers have fully returned back to making black comedies after going the darkest they’ve after gone in “No Country for Old Men.”
Usually the one factor that most affects the plot of a Coen film is location. No matter where a film is set, the Coen Brothers nail every part of the culture they are filming in. So far, I have no idea where exactly this film takes place. However, the synopsis gives off a clue that it is set in the Midwest. Could this mean that the Coen Brothers are returning to their Minnesota homeland, a place they haven’t shot a movie in since “Fargo?”
While their films are usually known for having great casts, “A Serious Man” seems to have a lot of nobodies. But, if the writing is as good as every one of their other films, that shouldn’t matter. Next up is Wes Anderson’s newest film: “The Fantastic Mr. Fox.” “The Fantastic Mr. Fox” is based on a book by Roald Dahl, a book that happened to be a favorite of mine growing up. That’s making me even more excited for this film.
“Fox” will be Wes Anderson’s first film since his underrated 2007 film “The Darjeeling Limited.” This is Anderson’s first time making a movie for the family, but I don’t think he’ll have any trouble doing so. Just because it’s in stop-motion animation, I don’t think it will be different than any other Anderson film; the titles and background music might as well have been from a scene in “The Royal Tenenbaums.” The film will be released this fall alongside “Where the Wild Things Are” and “Alice in Wonderland.” Based on the look of it, after this fall, kids’ films will never be the same again.
A Serious Man will be released October 9. The Fantastic Mr. Fox will be released November 13
*Joel & Ethan count as one person
View the Trailers Here:
@ Yahoo! Video
Share on Tumblr