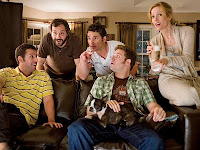 This is an unofficial second review of Funny People. Some movies are just so big, they need to be reviewed twice.

Usually, once I review a film, it’s done. But sometimes, I am so conflicted over a film that I can’t help but go back to it. This happened with “Funny People.” Critical consensus is telling me not to like this movie, but something inside me is telling me not to listen.
I finished my review of “Funny People” still partially undecided. I am still mixed on my opinion, but if I had to choose one end of the spectrum, “Funny People” would fall towards the “good” end.
The reason I have decided to revisit “Funny People” is because so much happens in this long movie, and I feel like I barely got to cover everything I wanted to in one review. One thing I really would like to talk more about is the film’s massive supporting cast. I talked plenty about Seth Rogen and Jonah Hill, but not enough about Jason Schwartzman. Schwartzman is one of my favorite comic actors today, and his performance in “Funny People” as an actor who caught a lucky break on a horrible sitcom was a highlight of the film. His performance reminded of his performance in “Rushmore;” like Max Fisher, his “Funny People” character always casts off an air of superiority for minor achievements. He was born to play smug.
Also worth mentioning is the always great Leslie Mann and the breakout performance by Aubrey Plaza. On that note, a post on PopWatch today made a fascinating observation about the portrayal of women in “Funny People.” While some wrongly accused Judd Apatow’s “Knocked Up” of being sexist (*cough* Katherine Heigl *cough*), the women in this film are portrayed as being no different then the men. Plaza’s Daisy is just a struggling comedian like the rest of the guys. Meanwhile, Mann’s Laura seems much less reactionary than Debbie in “Knocked Up,” despite hiding much more sadness.
There are so many great characters in “Funny People.” The real problem with the film was that even with its long running time, you still feel like you want more from the characters. Maybe the problem with the film wasn’t that it was too long, but that it wasn’t long enough. I’m not much of a sequel person but I would not at all mind seeing more of these characters’ lives (luckily, a Randy movie is reportedly in the works).
Overall, it seems impossible not to recommend this movie because overall, it is a well made movie. It’s a comedy that’s not like most comedies coming out nowadays: it’s not formulaic, it’s not predictable, and it’s real. Each of these characters feel like real people with conflicting emotions and even the power to change. But then again, it is an Apatow film.
“Funny People” is definitely different from the rest of Apatow’s oeuvre. Most of his film’s endings are decided from the beginning, but it’s the path to the end that is unpredictable. “Funny People” takes the opposite approach. In “Knocked Up,” you know from the beginning that one way or another Alison will have the baby, and Ben will one way or another be there. In “Funny People,” we know that George will try and win Laura back. Whether or not he’ll succeed at it, remains unclear. I don’t know which approach is better but in the end, both work. I am excited to see whether Apatow continues this new approach to comedy. If he does, then “Funny People” was just an experiment, something that wasn’t meant to be perfect. His next film then, should be comic gold.
Share on Tumblr