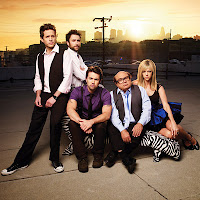 I guess it makes sense that “It’s Always Sunny in Philadelphia” would begin a new season with a pointless conversation about whether or not it’s illegal to own a hummingbird. After all, it’s not like they have anything valuable they could be giving back to society.

And so begins the fifth season of FX’s strangely genius, totally twisted comedy “It’s Always Sunny in Philadelphia.” The show started years ago, being helmed by an unexperienced writer (Rob McElhenney) with a budget under $200. Some thought it would never survive. They were wrong.
Maybe what’s so great about “Sunny” is that it totally abandons the idea of having any sort of continuous story-lines or continuity. Season four ended with Charlie (Charlie Day) creating a fantasy musical that accidently ended up being about being about child molestation in a failed attempt to impress the Waitress (Mary Elizabeth Ellis). Season five finds the gang living in a totally different from the one we last saw them in last November. This time, they’re dealing with a tough economy. And what better way for the gang to celebrate financial meltdown than to totally exploit it?
The season premiere is entitled “The Gang Exploits the Mortgage Crisis.” In it, the boys come up with an ill-conceived get rich quick scheme that involves them buying foreclosed homes and selling them at higher prices. As usual, their parallel universe collapses, and reality sets in. Meanwhile, Dee (Kaitlin Olson) decides to become a surrogate mom for a wealthy couple. The couple seems right out of “Juno,” and her plan emulates Octomom. Sounds perfect, right? Well, don’t underestimate the power of alcohol, or the stupidity of Mac (McElhenney), Dennis (Glenn Howerton), Charlie, and Frank (Danny DeVito).
While some shows tend to decline in later seasons, “Sunny” seems to be getting better and better. As the show has rolled on, each actor seems to be getting a better grip of their character, and finding a way to bring even the tiniest bit of sympathy to five of the most horrible TV characters ever created.
Maybe what helped make this episode so satisfying was that it did what a good “Sunny” episode should do: it placed the gang amongst intelligent human beings and higher standards of living yet still had them act as selfish and obnoxious as they usually would. However, this is also where some sympathy might build for the characters: in this idea that they’re simply misunderstood outsiders. They’re not trying to be bad, they just want to get ahead in life. But of course, their view of success is a little…warped.
The only problem with this episode falls in its very abrupt ending. Although it managed to tie both stories together well, in the end, parts of the episode felt slightly rushed. McElhenney took an hour long story and tried to cram it into thirty minutes. We’ll probably never hear about Dee’s attempt at parenthood, or Charlie’s attempt at a duel ever again, but then again, this gang does still have a bar to manage.
Share on Tumblr