Of all of the stunning images from “Gangs of New York,” one that sticks out is a shot that starts off on street level, and continues to go higher and higher until the 19th Century style buildings become the shape of the island of Manhattan. Here is a city that, over the years, I’ve grown to know and love. Here it is, in a form like we’ve never seen before.

“Gangs of New York” is Martin Scorsese’s latest vision of the mean streets of his beloved New York. However, it takes place 100 years before the days of “Mean Streets” and “Taxi Driver,” during Civil War ravished America.
The film starts off during a vicious gang war in 1848. Amsterdam Vallon (Leonardo DiCaprio) is the son of respected Irish immigrant Priest Vallon (Liam Neeson). On the opposite side is Bill ‘The Butcher’ Cutting (Daniel Day-Lewis). Bill is the glass-eyed son of a Revolutionary War soldier who gushes with patriotism. He’s known as The Butcher not just for his day job, but for his weapon of choice.
As tensions rise between the Irish and the so-called ‘Natives,’ Bill murders Priest. Many years later, Amsterdam returns to a corrupt, Boss Tweed ruled Five Points and seeks revenge.
“Gangs of New York” shows Scorsese’s recent fascination with American culture wars, as this film can be seen as something of a counterpart to his recent “The Departed.” However, this film explores the roots of American diversity. It’s about the earliest days of bigotry, much of it rising from immigration. In a way, much of the situations and dialogue sound frighteningly similar to the current national conversation on immigration.
Adding on to this is the near accurate version of history portrayed. While Hollywood will often portray history through a myopic lens of clean precision, Scorsese takes no shame in showing the filth, the blood, and the anger that shaped this era. Extra special attention is paid to the stunning sets. At times, it can distract from actual plot depth, but it definitely helps raise the story’s level of believability.
Of course Scorsese’s direction is excellent, but what stands out most is Day-Lewis’ performance as Bill the Butcher. He is truly the best actor of this generation, and the carrier of the method torch. He steps into the character and makes him both a blood-thirsty savage and a patriot feeling betrayed by a country he helped defend. He may be racist, but his feelings can be understood. Not to mention, all he has to do is sharpen a knife, or just squint his eyes to become the most intimidating presence in the film. He basically steals all chance for any other actor in the film to shine.
Now, back to Scorsese. What makes Scorsese one of the great directors of cinema is that he knows how to handle violence better than any other director. Of all of his films, “Gangs of New York” may be his bloodiest. While most directors might show someone being stabbed and barely show the consequences, Scorsese slows things down and allows us to see the horrible, dehumanizing consequences of each kill. Later, after another major battle, the cobblestone streets turn into a red river. To Scorsese, violence isn’t something to cheer on or admire, but rather something to be sickened by. Meanwhile, the aerial shots of the war dead are reminiscent of the sprawling images of the dead in “Gone with the Wind.”
Upon its release, “Gangs of New York” divided audiences right down the middle. I believe it is a minor masterpiece; it doesn’t reach “Goodfellas” or “Raging Bull” heights, but its certainly no sign of a Scorsese downfall either. The film runs over two and a half hours yet races by as Scorsese explores his favorite themes of honor, religion, and family. Like in any Scorsese film, the backdrop, cinematography, editing, and score of “Gangs of New York” is extremely well detailed and masterful. They portray the chaos of the era in the same way that each room in “Goodfellas” distinguished when exactly Henry was doing well or doing poorly. And while some have criticized that too much is covered at once, it all serves to cover the chaos.
Part of the problem could be in the story itself. While Scorsese at first creates the interesting idea that while Bill hated Priest, he had a deep respect for him. Once the conflict between Bill and Amsterdam arises that inexplicably seems to disappear from the film together with little explanation. Many scenes also seem pulled right out of the revenge film playbook. For example, the scene where Amsterdam saves Bill’s life so he can later murder Bill himself is pulled straight from “Once Upon a Time in the West.” A little clarification is never a bad thing.
But, these are just minor flaws. Overall, “Gangs of New York” exceeds its epic counterparts (mainly “300″) in creating a vision of the past that’s exciting and fascinating without actually losing a grip on the history part. It’s a beautifully made history lesson about the birth of a nation and a bitter love letter to a city that spawned one of the greatest directors of all time. 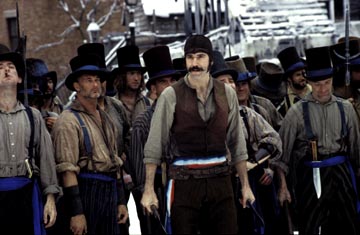