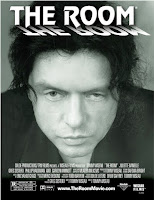 I know, I too often gripe about bad films, and how they are relentlessly tearing apart the fabric of good, intelligent, filmmaking.

Having said that, “The Room,” a disaster of a film, might just be one of the most rewarding film watching experiences you’ll ever have. Why is it that I’m recommending such a bad film? Quite simply, it achieves the rare feat of being so bad that its actually good.
Before delving into details, it helps to have some background on the making of the film. It was the first (and to date, only) feature made by Tommy Wiseau, who also wrote and stars in the film. “The Room” had a $6 million dollar budget. Apparently, Wiseau raised most of that money selling leather jackets. It also looks like more money was put into the opening credits than in the entire story itself. In reality, much of the budget was spent on a ridiculous billboard campaign.
I can’t say this for a fact, but it seems almost evident that the film’s editor was asleep throughout production and the studio executives who let it be made were likely on crack. Among its many problems, “The Room” contains so many scenes that have absolutely no value to the film. There are characters and important situations that are brought up and then never mentioned again. The dialogue is cliche and incredibly straightforward. In fact, Wiseau can’t even figure out how to use cliches properly (for instance, the placing of “love is blind”). The acting is emotionless and artificial. The camera is usually shaky and there are way too many unnecessary cuts to stock images of the San Francisco skyline.
I should be listing all these criticisms in a very angry tone. However, I feel a delighted one makes much more sense. That’s because “The Room” is the midnight movie of our generation to remember. The 1950s might’ve had Ed Wood and “Plan 9 From Outer Space,” but we have Tommy Wiseau and “The Room.”
There is no doubt you’ll enjoy the film so much because you’ll be laughing at it. Sometimes, that’s what can make an extremely bad drama an extremely bad thing. Usually, a film is bad because it turns out to be the opposite of what it intended. For example, “Gigli” was supposed to be a dark comedy. Instead, it turned out to be a dark drama. “The Room” is meant to be a tragedy “with the passion of Tennessee Williams.” Instead, its a passionless laughfest.
Still, what truly makes the room a cult classic is the eccentricity behind the auteur himself, Tommy Wiseau. In one scene, he tries to emulate James Dean by proclaiming “You’re tearing me apart Lisa!” In a later scene he destroys his bedroom bit by bit, a scene that is so clearly inspired by the destruction of Susan Alexander Kane’s bedroom during the climax of “Citizen Kane.” Of course, Wiseau’s thick, French accent sounds nothing like Dean, and the destruction of the bedroom scene is nowhere near as heartbreaking as the way Orson Welles filmed it. In both instances, they are flat out hilarious.
Could this be why in a way “The Room” is more than just a flat out bad movie. Despite how horribly made it is, it’s so hard to hate because it feels inspired. You can sense the filmmaker was striving to show his unique vision but ultimately failed at it, much to the delight of audiences across America. All of this is more than can be said for a film like, say, “New Moon,” which is thrown together in too quick a time for the sole purpose of commercial success.
I don’t think this post can really do “The Room” justice. You’re just going to have to rent it yourself or better yet, get to a midnight screening.
Here are a few great sample clips:
Share on Tumblr