In a recent tweet, Roger Ebert proclaimed 2009 as “one of those magic movie years like 1939 or 1976.” Some might say that’s a bold statement, but I say it’s not too far off. Of all the movie years this decade, 2009 ranks second only to 2007 (the year of “There Will Be Blood,” “No Country for Old Men,” “Michael Clayton,” “Knocked Up,” etc.).
Yes, there was much trash this year. From toy commercials like “Transformers 2″ and “G.I. Joe” to death porn like “The Final Destination” and the ugliness of “The Ugly Truth,” 2009 indeed showed just how low Hollywood was willing to go just to make a buck. But beyond much preposterousness, creativity abounded.
There was something many filmmakers this year, both mainstream and independent, showed that set 2009 apart: bravery. Filmmakers were so willing to be bold that the best films were beyond great. Some of the boldest moves included the changing of history, the willingness to not make simple conclusions, and an inclination to show that the world is unfair and sometimes, the hero just can’t win. Oh, and add some CGI blue cat monkey people to the mix.
This year gave us some amazing new talents (Marc Webb, Neil Blomkamp) and some old pros doing what they do best (Quentin Tarantino, The Coen Brothers, James Cameron).
2009 gave us an eclectic mix of Basterds and aliens and corporate a-holes. Here now, are the ten best films of the year 2009:
1. Inglourious Basterds- It’s been almost half a year since “Inglourious Basterds” came out, and I still can’t think of a better movie that has come out since. “Basterds” is a World War II movie that only Quentin Tarantino could ever pull off: philosophical, extremely violent, and funnier than you could ever imagine. Tarantino shows off a rare ability to make vast stretches of dialogue as exciting as epic battle sequences. Brad Pitt, Eli Roth and Diane Kruger give career best performances while Melanie Laurent proves herself as a worthy leading woman. The real scene stealer, though, is Christoph Waltz, who portrays a Nazi as calm and casual as he is sadistic. In the end, “Basterds” amazes me in its audacity to both change history and turn such serious subject matter into a fun B-movie. This is a medium for Tarantino to show us both his love of movies and the insane universe in which he inhabits. It’s a universe that, in a perfect world, would truly exist. Read Review

2. A Serious Man- Some films just grow on you. “A Serious Man” is one of them. “A Serious Man” is both the most mature and the meanest film Joel & Ethan Coen have made to date. It tells the story of the suffering but well intentioned patriarch of a 1960s middle class Jewish family. “A Serious Man” is the most personal film of the Coen Brothers’ career and it shows in the perfection of every little detail of the era and culture. Michael Stuhlbarg is perfect in the role of Larry Gopnik, flawlessly portraying the character’s flawed nature and vulnerability to an almost hilarious effect. The Coen Brothers have created a film that offers no easy conclusions and will keep you talking and talking about it. It will one day be looked as the quintessential film about the Jewish American experience. Read Review ; Extra Analysis

3. Up in the Air- “Up in the Air” is one of those rare films that strikes the perfect balance between comedy and tragedy. Jason Reitman managed to create a film about a man so far disconnected from other human beings that is both relevant social commentary and a future classic. “Up in the Air” shows the downside of a corporate life, and that even though flying solo can satisfy some people, nothing compares to the feeling of being (and remaining) connected to others. Read Review

4. (500) Days of Summer- Far and away the best romantic comedy to come out in years. “(500) Days of Summer” is a standout in its genre for its willingness to bend the rules and be unpredictable. It’s not necessarily a love story, but a story about love between Tom (Joseph Gordon-Levitt) and Summer (Zooey Deschanel). It’s told completely out of order because whichever way the story is told, this relationship will inevitably head toward disaster. “(500) Days of Summer” scores on creativity and on having the best use of a Hall & Oates song you’ll ever see. Read Review; Extra Analysis

5. The Hurt Locker- To date, most films about the Iraq War have tried and failed. That is, until “The Hurt Locker” came about, a film that connected quite simply because it offered a truthful, apolitical view of a war nobody quite understands. The film has an eerie documentary feel, and Kathryn Bigelow directs each action sequence with the utmost care and precision missing from most mainstream action films today. “The Hurt Locker” is not so much a film about Iraq, or a film about the hell of war, but rather about why men fight. Read Review

6. Precious- As so many before me have said, “Precious” tells the story of the girl you might walk by on the street and completely ignore. “Precious” is at times one of the toughest films to watch for its raw realism. However, sitting through it is almost a revelation for exactly that reason. Lee Daniels has created a film that will open your eyes to a world you knew existed, but like to pretend it didn’t. Amazingly, “Precious” also provides a bright ray of hope in such a dark world. Gabourey Sidibe gives a fine breakout performance as the titular lead. However, Mo’Nique truly steals the show as Precious’ abusive mother. She gives off the kind of brutal hatred that is at times too painful to watch, but too powerful to ever look away from.

7. Fantastic Mr. Fox- What kind of world do we live in where a movie made for kids, but is even more suitable for adults, fairs so poorly at the box office? Forget ticket sales, “Fantastic Mr. Fox” is a marvel, and proof of Wes Anderson’s wide range in directing ability. Anderson opts for old fashion stop-capture animation which quite ironically, makes its animal characters seem even more human. “Fantastic Mr. Fox” shows Anderson as the master of mise-en-scene. While kids won’t get the deeply existential questions Mr. Fox poses, make no mistake, this is the perfect movie for every member of the family. Read Review 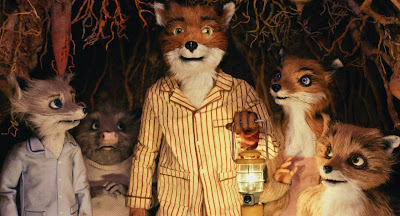 8. Avatar- James Cameron, the most ambitious director of this generation, created what is quite possibly the most ambitious sci-fi epic to date. What set this film apart is its landmark special effects and use of motion capture technology which turns the Na’vi into creatures with a tangible, human quality. But what amazes me most about “Avatar” is the new world Cameron created for it. Each detail of Pandora is so vividly realized that it might as well be a real place. This is the kind of imagination missing from blockbusters nowadays, and the reason why I hail “Avatar” the “Star Wars” of our time. Read Review

9. District 9- Watch out, because the moderate-sized country at the southernmost tip of Africa has just given birth to a new filmmaking force to be reckoned with. Neil Blomkamp’s film is a thrilling and sometimes even funny sci-fi mockumentary about aliens landing in Johannesburg, and then being segregated by frightened humans. It works as both social commentary and awesome sci-fi entertainment. This new classic boldly sets an anti-Apartheid theme in a country scarred by Apartheid and uses its aliens to convey the theme. While “Avatar” is the best sci-fi film of the year, “District 9″ is the most original. Read Review

10. The Hangover- I needed one legitimate comedy for my list. After much thinking, I decided I’d go with what was the most hilarious and surprising film of the year. “The Hangover” is a great comedy because nearly every line is funny. The characters are beyond funny, and are enhanced by the believable chemistry between the actors. What makes “The Hangover” worthy of the top 10 is how it manages to be both a gross-out comedy and a mystery at the same time. “The Hangover” at first seems like it’s going to be the typical bachelor party in Vegas flick, but in the end, it’s a perfectly tuned satire of the idea of Vegas and the reality of it. That and tigers. And babies in sunglasses. Read Review

Other Contenders: Up, Adventureland, Invictus, Bruno, Star Trek, I Love You, Man, Dare, We Live in Public
Worst Movie: The Final Destination (3D)
Still Need to See: In the Loop, An Education, Moon, The Blind Side, Paranormal Activity, Big Fan, A Single Man, Observe and Report
Most Underrated: Adventureland
Most Overrated: 2012
Biggest Disappointments: Public Enemies, Where the Wild Things Are
Share on Tumblr