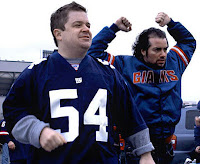 Here’s a little gem that escaped audiences. “Big Fan” is a film that came and went without much buzz, but it’s a film deserving of praise.

“Big Fan” is a film that’s something of a genre bender. It can be defined as either a solemn drama, or an extremely dark comedy. That’s up to you to decide. Most importantly, it’s an amazingly deep character study of a character you’d usually never want to know. The character in question is Paul Aufiero (Patton Oswalt). Paul is like Rupert Pupkin of the sports world.
Paul has two sides to him: one side is a lonely, unmotivated man who still lives with his mother. The other side is the world’s most passionate fan of the New York Giants.
By day, Paul is nothing but a worker at a parking garage. By night, he’s “Paul from Staten Island,” a frequent caller to a local sports radio station. One day, he stumbles upon Quantrell Bishop (Jonathan Hamm), his favorite quarterback. Paul follows him to a strip club, which results in a fight which sends Paul to the hospital. After the attack gets Quantrell arrested, Paul must decide between loyalty, and reality.
“Big Fan” comes from the mind of Robert Siegel. This is Siegel’s directorial debut. However, he did write the brilliant “The Wrestler.” This once again proves Siegel’s talent at making works of art examining what happens in the sports world from the inside out. While “The Wrestler” could be seen as something of a mockumentary following one man’s life inside the ring, “Big Fan” is a mockumentary about the man who always stands at the sidelines.
Siegel explores the twisted life of Paul Aufiero the same way he explored the twisted life of Randy “The Ram”: through an objective, almost apathetic, observer’s eye. Siegel is the rare filmmaker who realizes it’s not his duty to tell the audience how to feel about the character. Instead, he shows you everything the character does and you decide how to feel about them. Whether Paul is a pathetic loser who needs to get a life or just a lonely man who will only reach out in certain ways is up to the beholder.
What helps bring Paul into a three dimensional perspective is none other than the performance by Oswalt. Oswalt is just one of many renowned who have proven they have dramatic acting chops. What launches Oswalt into the ranks of other great comedians in serious roles such as Robin Williams in “Good Will Hunting,” Adam Sandler in “Punch Drunk Love,” and Bill Murray in “Lost in Translation” is his ability to take comedic sensibilities and shape them into a fine, serious performance. Even though Paul is the kind of man most people would mock in disgust, Oswalt makes him seem more like a human being than a walking joke.
“Big Fan” feels like a story ripped right out of the headlines. It’s one of those films that feels like it shouldn’t work but in the end, it does. It’s one of those movies that never goes where you’re thinking it will. For example, there’s no montage set to hipster music where the character gets new clothes and finally gets a job. No, it’s much more brutally real than that.
“Big Fan” basically has only plot development and a lot of things don’t change in the end. However, in a film, two things matter most about a story: what is being told, and how it’s being told. The “what” here is interesting, but with the wrong direction, it would’ve been nothing. The “how” here is stronger than ever.
Perhaps what makes the “how” so strong is the fascination the viewer will have with the film’s main character. Paul is a man of incredible complexity. Sometimes, he comes off as a stereotypical fanboy idiot. Other times, he comes off as someone with much intelligence, and a man who lives the way he does simply because he wants to.
If there is one definite thing we could find out about Paul, it’s that he’s extremely lonely. Siegel’s film is one of the better studies I’ve seen of isolation. Paul always has chances to escape his little bubble and be a real member of society. However, he doesn’t want to. Perhaps he sees no other way, he is just another of “God’s lonely men,” as Travis Bickle would say. But the beauty of the film is in its ambiguity, and we’ll never know the answer. “Big Fan” might offer an extremely vivid portrait of Paul Aufiero, but to know Paul, you just have to be Paul.
Share on Tumblr