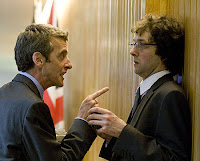 “In the Loop” might be so brilliant because of its stunning realism, or just because of how funny it is. The film is shot in a mockumentary style and spans a wide range of characters across an entire ocean. It takes place in the days leading up to a major war with a Middle Eastern country (no name is mentioned, but the film is obviously alluding to Iraq).
The film follows the lives of incompetent bureaucrats as the US and Britain prepare for war. The British side is headed by the Prime Minister’s enforcer Malcolm Tucker (Peter Capaldi), a man who curses more than he thinks. The war plans are constantly compromised by Minister for International Development Simon Foster (Tom Hollander) and his new assistant Toby (Chris Addison).
On the American front, Liza Weld (Anna Chlumsky) writes an anti-war report. As the two countries try and thwart the invasion, the more they work together, the less they get done.
“In the Loop” works so well for so many reasons. For one, it does not encompass one single style of humor, but rather a very broad comedic range. The film seems to have a combination of humor from both sides of the pond, which is a perfect fit. At times, it embraces British deadpan and visual humor. At other times, it uses the American humor of awkwardness and slapstick.
The great thing is that it doesn’t restrict British humor to the British characters and American humor to the American characters. One of the best examples in the film is when Toby stumbles into a meeting late, and he uncomfortably tries to find a good excuse. Of course, he has no clue what he’s talking about.
“In the Loop” is also blessed by hilarious dialogue from writer Jesse Armstrong. At times, some of the lines seem too natural to be scripted; I would not be surprised if improv took place in this film. The lines contain many pop culture references, and a fair amount of cursing. However, the cursing is not just thrown in for the sake of being there. It seems to have a purpose. At times, it can reveal frustration. Other times, it shows abundant emotional immaturity. Mainly though, it just manages to make you laugh. Rarely has the f-word been used this creatively.
“In the Loop” is boosted by an incredible ensemble. No one actor dominates. Rather, each is given a moment to shine. James Gandolfini shines as a US general. He manages to be hilarious by being intimidating at some times, and at other times delivering lines about murdering kittens and puppies without sounding angry.
The strength of the cast lies not just in the strength of each actor, but in the way they all communicate with each other. While great chemistry between actors is usually defined by how convincing it is that they like each other, the great chemistry in “In the Loop” is defined by how well the characters fight with each other. The fact that this was passed on by SAG for the Best Ensemble Award is something of a crime.
“In the Loop” works not just as comedy, but as spot-on political commentary. Armando Iannucci has created a satire worthy of being mentioned alongside “Dr. Strangelove,” the greatest political satire of all time. Like “Strangelove,” “In the Loop” shows miscommunication as the most powerful starter of war. However, unlike “Strangelove,” “In the Loop” is based more off something that actually happened rather than something that could’ve happened. Both are inevitably about trying to stop a crisis that’s already started.
All joking aside, “In the Loop” does have a very serious message to tell. Of course, it does this through humor. It portrays a world in which everything we’re told is essentially a lie, and the real, dirty business goes on way behind closed doors. Also, by having pretty much every person working for the US and British government be way too young, Iannucci is saying that Iraq War might as well have been planned by children. This balance of humor and serious message is something we don’t see enough in modern American comedies.
I really hope in the next two weeks, Oscar voters take this film into some serious consideration. Mainly, a surprise nomination for Capaldi and a Screenplay nomination for the bleeding gums scene alone would be just fine.
In the end, there is really one reason you should go and see “In the Loop”: it’s the most intelligent comedy you’ll see involving diarrhea jokes.
Share on Tumblr