Sometimes when you’re angry at the world, it’s not the world you should be angry at, but rather, at yourself. It takes a lot to portray subtle self-loathing. “Greenberg” does just that.

Despite what you may think, “Greenberg” is far away from being a comedy. Yet with a director like Noah Baumbach, there are still traces of humor in the air.
Another surprising thing about “Greenberg” is that it’s title character, and the one seen on every poster, is not quite the main character. Who may be our real protagonist (or in my view, the first protagonist), is the character seen first in the movie. The first protagonist is Florence (Greta Gerwig). Florence is the nanny of the Greenberg family. She has potential but barely utilizes it. She seems pretty content with herself.
As the Greenberg family heads on vacation, the father’s brother Roger (Ben Stiller) comes to stay at the house after having recently been let out of a mental hospital. He’s not actually insane, he can just act like it sometimes.
With “Greenberg,” Baumbach leaves his hometown of Brooklyn and replaced it with sprawling, smog-crowded Los Angeles. While the characters of his film “The Squid and the Whale” could seem so distant even though they were always so close, the characters of “Greenberg” seem so incredibly distant both physically and emotionally. Baumbach is a great director in utilizing setting for substance. He uses it not only to show emotional distance but also to later disprove the practicality of Greenberg’s lifestyle, which is a philosophy of doing absolutely nothing.
Baumbach has also proved himself an excellent director by pulling off the littlest things with such great care. He has a few excellent shot choices that last just seconds yet are still effective. One of those might be that directly behind the ears shot of a dog walking, with the afternoon light glowing down overhead. Baumbach can also pick an excellent soundtrack.
Oh, and he’s a fantastic writer. He’s a lot like a Wes Anderson clone, in a good way. He excellently tackles egotism by showing certain people’s self-centered lives in relation to the world they inhabit. Most directors might portray narcissism through a first person perspective, but Baumbach is too creative for stooping to that.
Baumbach achieves this by telling the story loosely from Florence’s perspective. I say loosely because she doesn’t inhabit every scene and we don’t even get narration from her. She’s never as developed as Roger yet she always seems to be an overwhelming presence in the film. He even manages to balance out her own presence by adding in the perspectives of the other people involved in Roger’s life. That, there, is how you can develop a full cast of characters in under two hours.

Even with the varied cast, and even with a different title character, I am always drawn back to Florence. This is mostly because of Gerwig’s performance. She’s been in so little before this but I already think she deserves an Oscar nomination. Her character is made up of awkwardness and quirks. Yet, she avoids turning Florence into an M.P.D.G. (manic Pixie dream girl), and instead turns her into someone filled with deep pain that we’ll just never understand. Sometimes, she feels almost too real to be acting.
Then, of course, there’s Stiller. It would be dumb to say that this is his big triumphant foray into dramatic acting. Frankly, his performance as Greenberg is very similar to his performance in “The Royal Tenenbaums.” I mean nothing negative by saying this. I think though what Stiller’s performance here proves is why comedians are perfect for drama: the most important things in life are usually just too funny to take seriously. For example, Adam Sandler took all the rage he used for laughs in “The Waterboy” and just made it more serious in “Punch Drunk Love.” Stiller is always funniest when he is portraying unexplained narcissism and resentment. Here, Stiller is doing what he’s always done in movies such as “Zoolander,” “Tropic Thunder,” and even “Heavyweights.” This time, it’s just shown from a more mature angle.
What I also enjoyed about “Greenberg” is how Baumbach connects these two characters. They both just seem to be two parts of the same person. However, a little more depth is given to Roger. He is such an unlikeable character. He projects the kind of hatefulness that only an antagonist should show. Baumbach never attempts to justify his actions, but just simply show he might just learn and become a better person from the terrible things he does. 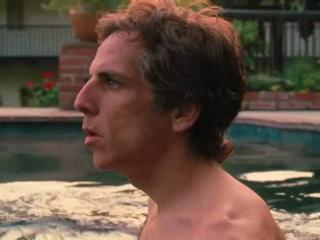 “Greenberg” is a great redemption story because a character is shown who truly needs redemption more than anyone else. However, the world around the character is never shown as being moral or flawless either. Everyone is equipped with their own set of problems. When everyone is dragged down to the same level, it is then that sympathy can be felt for an unlikeable character.
With “Greenberg,” Baumbach shows that he’s a great story teller simply because he can take the right story, and utilize it in the right way. A good film isn’t just about the story, but about how that story is handled. When it comes to turning narcissism into self-hatred and cliches into originality, look no further than the creativeness of this fine auteur.
If You Liked This Movie, You’ll Also Like: The Squid and the Whale, The Royal Tenenbaums, Rushmore, The Graduate, Rachel Getting Married, Sideways
Share on Tumblr