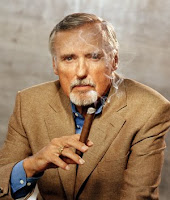 It can be hard to sum up the entire life of an actor from the only two roles you’ve seen them in. But when they’re as powerful and unique as these certain two, it’s definitely worth a shot. After a long public battle with prostate cancer, Dennis Hopper died on Saturday. He was 74.

Hopper’s career as an actor (and many other jobs on the set) lasted over half of a century, spanning both film and television. Some might always have considered him a bit part, but he always left his mark on various legendary productions. At just 19, he had a small yet prominent part in “Rebel Without a Cause.”
But unfortunately I will admit, I am not the biggest expert on Hopper, and certainly am not worthy enough to tell his entire life story. But what I can do is show you Hopper through the two very different, but very amazing performances of his that I have seen.
Hopper’s breakthrough role came in 1969 with “Easy Rider.” Here was a film that not only established Hopper as a fine actor, but also broke down barriers and redefined American cinema. It could be even considered the first successful independent film made. And Hopper was such an integral part of that. Not only did he star in the film, but he also co-wrote (with Peter Fonda) and directed it. As a writer, he delved into long, maybe even improvised, speeches that could change your outlook on life. As a director, he established an America that was both hauntingly beautiful and free as well as nightmarishly conformist. One could argue that without him, there would be no Tarantino, no Soderbergh, no Kevin Smith, and no Miramax. Hopper’s performance is also hard to forget. He plays Billy, the less serious, slightly more laid back character next to Fonda’s Wyatt. Hopper had this strange way of making his character’s memorable through just the tiniest details. One might remember Billy best from his giggly stoner laugh. Despite some of the less serious aspects of the character, we are no less haunted by his fate at the end.
Hopper might not have gotten the film’s pivotal line (“We blew it”) nor did he get the giant career breakthrough (that went to Jack Nicholson), but his contribution to this piece of history is something of an unseen story. Let’s just say he directed “Easy Rider” to victory.
The best performance Hopper might’ve ever given is in David Lynch’s freaky “Blue Velvet.” In it, he plays psychopath Frank Booth. Frank is a villain beyond our wildest dreams, which is why he just might be a dream. Yet, Hopper doesn’t let that bother him. Frank is into inhaling Nitrous Oxide and holding families hostage while he commits acts of shocking sexual perversion. It’s a total turn around from Hopper’s performance in “Easy Rider.”
Once again, he gave it his all. Frank might seem like nothing more than a one-dimensional psychopath, but Hopper took him out of that territory and made him hauntingly real. He became a projection of all of our greatest fears. You’ll never forget his beer preference nor the way he mouths “In Dreams.” In the end we question, is Frank just a projection of our nightmares, or the man who lives next door to us. As the obituaries begin to pop up, most headlines have contained the word “Bad Boy.” While Hopper certainly carried that reputation, putting him simply into that category would be too little. Outside of film, he may have been a bad boy yet inside of film, he was a revolutionary of a filmmaker, and a truly exceptional actor. To that I say, keep on riding easy, Dennis Hopper.
Note: I just realized I totally forgot to include “Apocalypse Now” on the list. My apologies.
Share on Tumblr