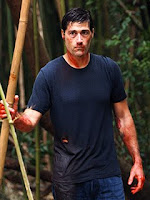 SPOILER ALERT: If you didn’t watch the series finale of “Lost” yet and ever plan on it, I advise you do not read this until you watch it.

Well, it’s over. Now please excuse me for a few more seconds while I collect my thoughts and feelings.
…
There. What I have here is a film blog. I thought about movies. But every once in a while, there’s a TV show that captures the magic I see in films. “Lost” happens to be one of them. Ever since that first plane crash, I’ve been mesmerized by it. Like any “Lost” watcher, I’ve had so many questions. Tonight, in its last episode ever, “Lost” did the impossible: it answered every question I had, and then it took all of its answers back.
Here is my interpretation. It might not be right, it’s merely an interpretation. Some spent six seasons believing that the island was purgatory. Well, they were close. The island wasn’t quite purgatory. However, the Sideways world was. It was a purgatory they created. It was a world of redemption and second chance that these characters so desperately needed. It’s exactly what the Island represented in seasons one through five. But now that that was taken away, this was the place where they could go before they went knockin’ on heaven’s door.
As for everything else, we did find out what the island is: it is the light. This light is the source of all enlightenment for some. Keep it in one place, and it’s good. Let it get out, and unspeakable evil will be unleashed. That unspeakable evil was the Man in Black, who spent the entire season in the skin of recently deceased John Locke. His reign of terror came to an end at the hands of Jack Shephard, who truly became the hero figure that the show has tried to make him look like for six years.
Let’s talk about Matthew Fox for a second. I never much liked him, nor the character. While a weak main character will usually bring down a work, “Lost” was lucky enough to have such an amazing supporting cast. In the past, Jack was always stagnant and arrogant. Plus, Fox never put much emotion into him. But starting with his breakdown after Jin and Sun’s death, Jack became a character I actually felt invested in. Then, in this episode, he truly became the Luke Skywalker of “Lost”: the one man driven to great things by fate, the man with the force. You could even call him Christ, as well.
Jack’s sacrifice was heartbreaking and almost uplifting at the same time. The final shot ever of “Lost” was Jack lying in the same bamboo forest he landed in once the plane crashed, but this time with an eye closing rather than opening. In this moment, Damon Lindelof and Carlton Cuse so beautifully and perfectly brought “Lost” full circle. The moments before might’ve left you scratching you’re head, but that final shot was no “Sopranos” fake out.
Before I get into the heavy interpretation stuff, let me appreciate “Lost” for its entertainment value. Tonight was two and a half hours of more than solid entertainment. The final confrontation between Jack and Fake Locke was one of the most intense fights I’ve ever seen shot on film. It could be because of the slippery slope atmosphere. Or maybe it’s because of the build up to it. It wasn’t being built up for just a few episodes. No, this is the confrontation we’ve been waiting for for six years.
Kudos to Cuse and Lindelof for how well structured this episode (appropriately titled “The End”) was. While large parts of the episode were certainly devoted to plot, much more was devoted to character. While it was important to see Kate and Sawyer get off the island and Hurley becoming the new Jacob, it was also important to see everyone unite in the Sideways world.
The connections achieved in the Sideways world simply achieved what I believed “Lost” has been going for since day one: to show how much the little things matter. In more detail, “Lost” shows how so many different people can somehow be connected to one another. At the end of the day, “Lost” is all about how a bunch of random people ended up on an island together and then realized, they all impacted each other’s pasts and futures.

Another important “Lost” theme was handled carefully this season: perspective. “Lost” has never been the show to stoop down to creating good guys and bad guys. Good guys become bad, and bad guys become good. This was seen in the battle between Jacob and the Man in Black. Some could view Jacob as a God like figure, while others could see him as an oppressor. Meanwhile, the Man in Black could be both a devil and a man who just wants to be free. Also, Locke became a villain and Benjamin Linus became a good guy. When a show can so convincingly turn good into bad and make all perspectives seem convincing, you know you have good writing.

Another highlight of this season includes, as usual, Terry O’Quinn. He always gave outstanding performances as John Locke, but this season was unique as he was playing the same character with a totally different disposition. He nailed the role of noble, complex villain.
As for season six itself, I wouldn’t put it on the same level as season one. However, it did have its moments that emulated the spectacular first season. By taking away the whole time travel aspect and focusing more on the faith aspect, Cuse and Lindelof were able to spend more time trying to understand what the island really is while suspending reality. They also brought back those nice, quiet moments which might simply involve the cast hugging and appreciating their own existence.
While many have been polarized by the Sideways universe, and especially with what it turned out to be, I enjoyed it because it brought many characters back to their roots, with a few twists. While the Island had villain Locke, the sideways world had hero Locke. Even after they died on the Island, Jin and Sun were still alive and eternally in love in the Sideways world. Not to mention, it also brought beloved Charlie back into our lives.
Season six also brought us one of the best episodes “Lost” has ever produced. No, I’m not referring to the finale; I’m referring to “Ab Aeterno.” What simply made this episode such pure genius was its compelling storytelling. Not only did it reveal so much about the island, but it also proved that sometimes “Lost” could be at its finest when it sticks to one dimension of time for more than five minutes.
But of course, there was a lot that didn’t work this season. That temple storyline felt more like the Hydra Station than the Hatch; a time filler rather than an actual compelling storyline. However, the creators were wise in not dwelling in this one space for too long. And as always, there were a few backstories that just didn’t have the same impact that others did. For example, while the Jacob backstory was crucial to the show’s mythology, his history strangely came off as cheesy rather than inspiring.
What did this ending mean for “Lost” as a whole. In the series-long battle between fate and freewill, it seems fate was the winner here. It is still arguable whether fate or freewill brought them to the island but ultimately, they were all reunited by fate.
While the they’re-all-going-to-heaven ending isn’t something I’d buy into in reality, it’s something I buy into only in the universe “Lost” has created. “Lost” has done what any good fantasy should do and created an alternate reality so fully realized and elaborate that it becomes a living, breathing entity where anything is possible. I would even take the risk of saying it’s created a sci-fi mythology great enough to allow this show to be mentioned in the same breath as both “Star Wars” and “Star Trek.”
Some also seem to get angry when anyone calls “Lost” ‘groundbreaking’ or ‘revolutionary.’ Revolutionary is a step too far, but groundbreaking isn’t. Few shows would ever even dare to tell their stories so out of order and then actually make the viewer think by not answering every question for them. “Lost” was one of the last bastions of great storytelling left on a basic cable station.
In its final moments, “Lost” showed its self-aware, self-reflexive side, then it showed what it was truly all about: love. Amidst all of the polar bears and smoke monsters, “Lost” just wanted to show us the peace brought about by loving connections between human beings. It could’ve been corny, but that final beam of light felt earned, and it got me. Maybe it was because they included the dog.
For the joy and the frustration you’ve provided me over these past few years “Lost,” I salute you.