For a moment, let’s take the word ‘hillbilly’ out of our dictionary. Let’s also take the word ‘hick’ out, and all those other words. Let’s just call them, well, people. For the sake of understanding, and truly appreciating “Winter’s Bone” at least.

“Winter’s Bone” is a nice little movie. Well, not nice in the sense that it’s at all happy or uplifting. Just in the sense that it feels like a movie that is rarely released at this time of year.
“Winter’s Bone” is not much about big events or big thrills, it’s just about people and a story. The film takes place in an extremely remote area of the Missouri Ozarks in a small, tightly knit community. 17-year-old Ree (Jennifer Lawrence) is quite a story. She’s forced to take care of her ailing, pill-addicted mother and two younger siblings.
Why does she have to do this? Ree’s father is a meth cooker on the run from the law. He’s expected to appear in court, so he puts his house up for bond. This means that Ree and the family, already money troubled enough, will be forced to live on the street. Or in there case, the woods. As protector, Ree now must find her father, and save what remains of her family. The results aren’t pretty.
“Winter’s Bone” is nothing like what your expectations would have you believe it to be. It’s set up like a thriller. It’s lit up like a horror film. Yet, it’s simply a character study. It’s an examination of how people react to a crumbling society and deteriorating morals. The story is strangely told in such a simple way, yet in that simplicity lies a deep complexity.
Every good character study needs good actors, and “Winter’s Bone” has just that. Here, Lawrence is basically expected to hold down the fort. Just as Ree carries the weight of her family’s sins and shortcomings on her shoulders, she carries much of the film. She projects a style that is never panicked, and never over-the-top. She shows much and ambivalence, and even more realism. An excellent supporting performance comes from John Hawkes as Teardrop. He turns this character into a sometimes frightening, and always unpredictable, ball of rage.

“Winter’s Bone” might just be one of the best made films I’ve seen in a while. The cinematography is nothing short of masterful. Every shot looks drained of color, and devoid of the goodness in life. It helps feed into the film’s great usage of the Missouri landscape. Those patches of snow, the sagging trees, and of course that lake in the film’s shocking climax all contribute to the establishing mood excellently.
All of this reminded me much of the recent “Frozen River,” which coincidentally told a similar story of people in the country fighting for survival. I could pinpoint several other films this one reminded me of. That country band that played as Ree is violently abused might bring up bad memories of “Deliverance” (especially that banjo). And though this might be a stretch, the lake scene had a very similar vibe to the one that marked Fredo’s end in “The Godfather: Part II.”
At times the film even feels like a novel. I guess it’s something with the rhythm and feel of the conversations. No surprise there, it was adapted from one. 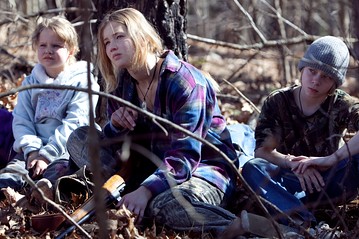 All I can say about “Winter’s Bone” is that it’s not the movie you’d expect to see in theaters everyday. It’s the kind of film that should be going into, and then getting released from, Sundance more often. Even at its darkest parts, there is always the optimistic spirit of the struggle for survival. Not to mention, an amazing view of humans at their most self-sufficient.
“Winter’s Bone” is one of those films that forces us to forget about all of our thoughts and stereotypes of other people and see a new perspective on life first hand. No matter where one comes from, life can be hard, and we can all somehow connect because we all have our struggles. Though, not everyone has to deal with severed hands.
Share on Tumblr