Hey everyone, Pixar doesn’t have to be the only studio allowed to make animated films. Competition begets creativity. In the case of animated competition, Illumination Entertainment gave us “Despicable Me.” It might feel a little less grown up than “Toy Story 3″ but that doesn’t stop it from being entertaining and even a little touching.

I don’t mean to keep comparing “Despicable Me” to Pixar, because it deserves to seen as its own separate entity. It reminded me a little bit of “The Incredibles” for the world of super villains. It’s all about Gru (Steve Carell). Gru has a reputation for being the world’s greatest villain. He’s bald, has something of a hunchback, and has a creepy French accent that makes him sound a bit like Tommy Wiseau.
Gru’s status as greatest villain is threatened. The young and clumsy Vector (Jason Segel) impresses the world of evil by stealing the Pyramids. This also puts a damper on some of Gru’s biggest plans. Gru does what any evil genius would do: adopt three innocent little girls to secretly undermine for your operations. This works fine, until you begin to feel compassion.
“Despicable Me” doesn’t quite look as well polished as some of the other big animated films. Yet, there’s something about its animation that is both realistic and eye-poppingly alive. The animated world around the characters is more than convincing enough for the audience to totally buy it. 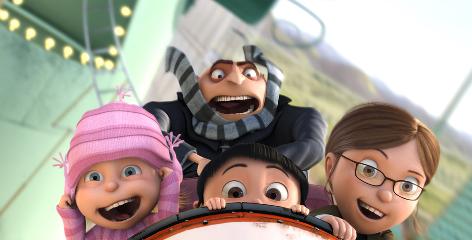 Even the characters come with a convincing reality to them. A few flashbacks make Gru’s evil seem a little more understandable. Who said a movie for children couldn’t have a little depth to it?
Another thing that adds to the characters is the excellent voice talent. Usually, recording a role for an animated film doesn’t require much effort. However, the actors here actually add some personality to their roles. Segel weirdly feels like the awkward guy he always plays. Carell’s never really played a villain before, yet he manages to pull of some of his dorky and lovable qualities that he’s so good at.
What can make a children’s movie go from children’s movie to family film is how universal its story and themes are. “Despicable Me” gets that down right. It provides a framework that makes room for endless imagination. It has fun showing off both Gru’s crazy inventions (which involve a ridiculous car and a shrink ray) and his pension for evil. While some animated films can get carried away with visual gags, the best jokes of “Despicable Me” come as a result of the imagery. At times though, you just have to look closely, or you might miss it.

Probably the highlight of the movie are the little Minions, Gru’s assistants. What species they are is never stated, but they look like talking yellow Mike and Ikes. They speak a strange language and do nothing but cause problems. They seem like the kind of characters who would get their own short film before a big movie starts. Their running time was extended, with great results.
“Despicable Me” has a heart and a message to it that’s beyond the typical “don’t judge others” and “be nice” that you get from most children’s movies. “Despicable Me” is about the value of family, and how much different life can be when you have someone to care for, and someone else who actually cares for you. This is so much more than you might get from say, “Shrek” or “Shark Tale,” so why did it have to go with the typical dance sequence ending? “Despicable Me,” you are better than that.
Besides that little hiccup, even if you don’t have a kid, have a little heart to check this movie out. Hey, it probably has one of the more original stories this summer.
Share on Tumblr