When “The Fighter” was first released, the common reaction was likely, “are you kidding? Another boxing movie?” If a director has the chutzpah to make a movie about a topic that has been explored to death, he better make something good. Since it’s David O. Russell, the director of “Three Kings,” then it must be worth our while.

“The Fighter” is the kind of entertainment that has a huge mass audience potential, yet its slow pace is made for those with patience. The film begins as a psuedo-documentary and switches between that and narrative format throughout. This film tells the true story of Mickey Ward (Mark Wahlberg), a struggling boxer from a rough neighborhood in Lowell, Massachusetts. His future career as a boxer is compromised by both his love for a beautiful bartender (Amy Adams) and his dysfunctional family, which includes his abusive mother (Melissa Leo) and his washed up, crack addicted brother, who is a former boxer (Christian Bale).
“The Fighter” is what one might consider a slow burner, for better or worse. It begins slow and at first doesn’t seem to know quite which direction to take the story. It takes an extremely dramatic twist less than midway into the story for “The Fighter” to truly pick up steam. It goes from an average underdog story to something very different; something that is much more immediate and important than the typical Hollywood fable.

“The Fighter” also brings a new dimension to the now popular tough-and-from-Boston film. Coming off the heels of this year’s “The Town” as well as “The Departed,” “Gone Baby Gone,” and “Good Will Hunting” of past years, Boston has become less of a city and more of a theme in the eye of the filmmaker. Growing up in Boston means being tied down to societal and familial constraints. The only way to escape these constraints comes through pursuing one’s passion, whether that be solving math problems, robbing banks, or boxing.
While this is also one of the more realistic looks at crime and drug problems in the city, there is also a sense of warmth surrounding the characters unseen in most other Boston films. This can be seen mainly in that fantastic first scene, where Mickey and Dicky walk through the streets of Lowell and embrace everyone they see shows that in a way, everyone is looking to escape with Mickey. Everyone feels Mickey’s quest is their quest as well.

Looking past a few small flaws, “The Fighter” is an example of how a few good performances can severely impact the course of a film. Wahlberg is a fine choice for Mickey. In fact, this could even be a bit of a personal role for him given his past in Boston as well as his troubles with family and the law. However, he is nothing truly special. He lacks that hilarious, nasty, and committed attitude that made his performance in “The Departed” so unforgettable.
The true strength of the ensemble lies in a few supporting characters. The ladies of the film bring much needed emotional depth to their roles. Adams is proving herself a fine young actress capable of even bigger roles while Leo shows she is always more than capable of playing troubled, lower class mothers. 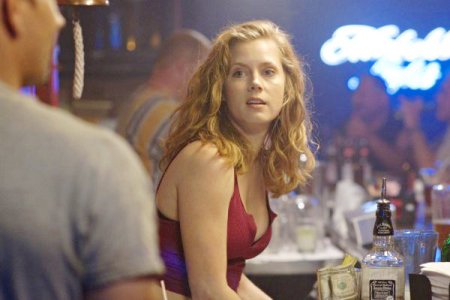 The real soul, the real strength of the film, lies totally in the performance of Christian Bale. It is weird to think he is even a supporting character, given how much of the story relies on him, and how he dominates every scene he is in and makes you forget the story is really about Mickey Ward. I could tell from the film’s very first shot that his performance was going to be something special. Like Natalie Portman in “Black Swan,” Bale acts with his entire body. With his googly eyes, shaky arms, and salamander-like body, he is the sad embodiment of drug addiction. Bale makes Dicky fast-talking, funny, and sad. He starts the story as someone we look at and pity, but by the end, he has truly earned his redemption.
What is most interesting about Bale’s style of method acting, most similar to De Niro in his glory days, is that he is always acting. A common habit for an actor when they are in a shot where they don’t talk is to just sit silently, and stare. Bale however, doesn’t end his drug-addled fidgeting. I could probably spend an entire review talking about Bale’s acting, but there is actually a whole movie here to still talk about. So let’s just say this: Bale has earned this year’s Best Supporting Actor statue.

What Bale’s performance shows is the potential energy and excitement surrounding the story that “The Fighter” is ultimately able to embody. “The Fighter” is the story of the unlikely coming true. Director David O. Russell, who also made the Gulf War parable “Three Kings” highly plausible (and still relevant), succeeds at this task admirably. Scenes like the one where the characters walk through the streets, as mentioned earlier, show the uplifting potential of such depressing material. Not to mention, the boxing scenes are shot in a televised style, capturing the excitement of watching a match live. It also creates a strange, yet effective, detachment from the actual violence happening onscreen.
“The Fighter” is a film that shows that what is ultimately most important is not what a film is about, but how it is about. There are only so many stories to be told so the same old stories might as well be told in new, innovative ways.
The struggle of the boxer has been captured so many times that it can’t possibly be interesting anymore. However, David O. Russell makes the right choice and takes a page out of the “Raging Bull” handbook of how to make a good sports film and barely focuses on the actual sport itself. The sport is less of a sport and more of a means for the characters to express themselves in some way, either to release energy, or overcome adversity. The title of “The Fighter” does not suggest someone fighting for a title, but rather someone fighting merely to stay alive.