“True Grit” begins like any other Coen Brothers movie: with a pretty image set to mysterious background narration. Is this going to be another typical Coen experience? Not exactly.

“True Grit,” the rare western that actually takes place during the days of the wild west, is told in a fittingly traditional fashion. This is quite a radical departure for a pair of directors known for constantly pushing the storytelling envelope. However, that is part of the reason this film feels so interesting. Despite being a remake of an adaptation of a book, it still manages to remain unique.
I may not be the best person to review this movie, as I haven’t seen the original version of “True Grit,” nor have I read the book. Maybe that won’t matter, as those who have seen the original film claims it has little to no resemblance to the latest version.

Regardless of the version, “True Grit” takes place in what looks like somewhere between Colorado and Montana in the late 1800s. Mattie Ross (Hailee Steinfeld) is a young girl looking to hunt down Tom Chaney (Josh Brolin), the man who ruthlessly killed her father. To pull this off, she hires Rooster Cogburn (Jeff Bridges), a one-eyed, former U.S. Marshall with a reputation for shooting things and chugging whiskey. Accompanying Cogburn for the kill is the often hot-headed, yet wise LaBoeuf (Matt Damon), who’s name shouldn’t be confused with the name of a certain actor from “Even Stevens.”
But, I digress. While Cogburn and LaBoeuf set off to find Chaney, they reluctantly let Mattie join. What follows is a long journey through the American West that leads to much danger and self-discovery. 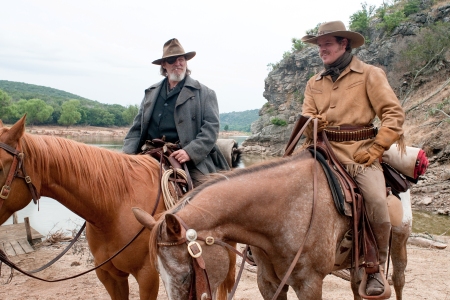 It is very easy to go ahead and dismiss “True Grit,” as many others have been doing. Most say the Coen Brothers are capable of much better than this, and that is true. They are capable of making films that become cult classics, and others that go onto win Best Picture. “True Grit” will probably do neither. However, that doesn’t stop it from being a solid, highly entertaining movie.
While “True Grit” wasn’t as amazing a collaboration between the Coen Brothers and Jeff Bridges can be, it reminded me how much I missed the western genre. The genre hasn’t necessarily died, it has just gone in a new direction, often telling tales that take place in the modern day (i.e. “No Country for Old Men,” “The Three Burials of Melquiades Estrada”). There hasn’t been a truly great “old” western since “Unforgiven” in 1992. Perhaps the success could spur a much needed rebirth in the genre. 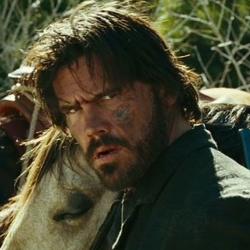 What I found interesting about “True Grit,” something one would rarely see in a western outside of the 1960s, was some subtle commentary, or at least cognizance, of racism. There definitely wasn’t supposed to be a big point made out of it, but it’s good to see every once in a while the acknowledgment of Native Americans, and how poorly they were treated.
Despite how different this film is from other Coen Brothers films, this is unmistakably their film. There is that distinct focus on the landscape, highlighted by Roger Deakins’s breathtaking cinematography. There is also that attention to the little details that distinguish them from all other filmmakers. This is one of the few westerns I’ve seen where the characters actually talk appropriately for the time period. Those accents may be impossible to understand, but a little historical accuracy never hurt anyone.
A great Coen movie is also about its characters. And that, “True Grit” has a lot of. Despite what the commercials will make you think, Rooster Cogburn isn’t quite the main character. The film is really about Mattie Ross. Without the right actress, Ross could’ve just come off as whiny and annoying. But in her debut, Steinfeld nailed it. In a way, she resembles the performance of Hit-Girl in this year’s “Kick-Ass”: she is smarter and more skilled than her superiors but in a way, overcompensating for her young age. In a world full of illiterate southerners, her knowledge outshines everyone around her. She is this film’s Marge Gunderson. 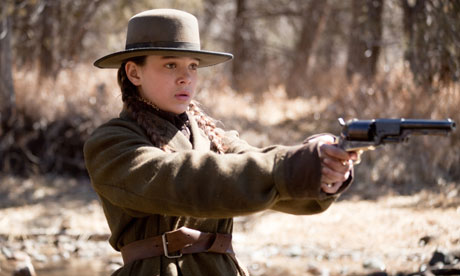 I’m sure though that the reason any devoted Coen Brothers fan saw this movie was for Jeff Bridges, seeing as the last time the directors and the actor collaborated, “The Big Lebowski” was created. “True Grit” lacks the wit and twisty intelligence “Lebowski” offers. Nonetheless, it proves that this is a collaboration that works. The directors have a certain vision in mind, and the actor follows it perfectly.
Bridges shows in “True Grit” that he is one of those actors that has gotten even better with age. In “True Grit,” he shows what kind of performance he is most capable of: the outsider who is aware of his isolation from society, but celebrates it while ignoring all of his possible flaws. In his transition from Dude to Rooster, he trades joints for rolled up tobacco, and has no problem doing so.
Really the only performance I had any problem with in “True Grit” was that of Damon. He is usually a fine actor; one who is always watchable. However, it seems like here he was barely trying to pull of an accent. That is a shame, because when he gets into his roles, he can be truly extraordinary (see “The Informant”).
I want to celebrate “True Grit” for what it is rather than what it isn’t: an extremely solid piece of entertainment that may not outshine the rest of these directors’ body of work, but certainly outshines many of its contemporaries. I am not going to forget “True Grit” for a few small things; like that little amazing scene when Mattie bravely crosses the river. It is also hard to forget the weird things, such as the man dressed in full bear costume, or the other man who communicates through farm animal sounds. Why were these things included in the film? Who knows. The best parts of any Coen Brothers film are the parts left unexplained.
Share on Tumblr