If there ever was such an honor, “Blue Valentine” would win the award for most depressing film of 2010. This honor is not meant to put down any of the achievements of the film, but rather a heads up that this is not a film about the world’s happiest marriage.

“Blue Valentine” has two settings and two time periods: rural Pennsylvania and New York City, past and present. In present day, married couple Dean (Ryan Gosling) and Cindy (Michelle Williams) are on the verge of a breakdown. Cindy no longer feels any affection for her husband, and Dean remains in an aloof, child-like state. The marriage between Dean and Cindy is the ultimate portrait of disappointment.
In flashbacks, the story behind Cindy and Dean’s love is revealed, as the audience slowly finds out that at one point, there really was love to be had in this marriage. 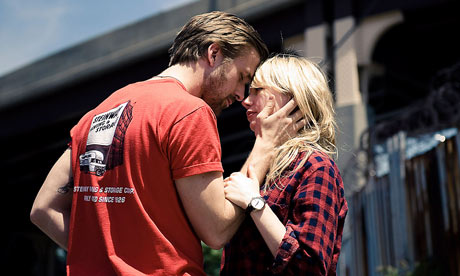 The story of a couple falling in love and becoming bored and suppressed with age is a story that has been portrayed on the silver screen over and over again. “Blue Valentine” does manage to be saved from being one big cliche. Unlike other films about broken marriages like “American Beauty,” “Blue Valentine” is as much about the joy of love as it is about the pain. Most films about marriage portray how a marriage can fall apart. Few also show how they are built.
The flashbacks in “Blue Valentine” are certainly the most effective part of the film. Not only do they build backstory, they also build emotion. The contrast between the clear, digitally shot present day and the shaky hand-held filming of the flashbacks show misery becoming clearer and clearer. The flashbacks are marked by youthful innocence, and the present day is marked by sad awareness in older age. 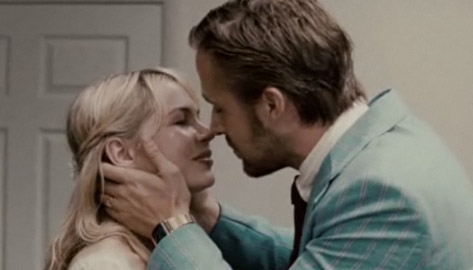 “Blue Valentine” would not be the same without its two outstanding lead performances. The two actors play the parts perfectly in both old age and youth. Despite his image, Gosling is not afraid to get dirty in order to play his role perfectly. Throughout the film, he looks less like Ryan Gosling and more like Nicolas Cage in “Raising Arizona.” With his scruffy looked and muffled voice, he is almost unrecognizable.
His female counterpart, Michelle Williams, gives one of the best female performances of the year. She seems to have a thing for playing alienated wives (see: “Brokeback Mountain”), yet here she does it better than she ever has. There is one scene where she pulls off a rare feat and manages to act with her eyes when the rest of her body isn’t shown. In those eyes we see so much sheltered pain getting ready to come out. In those eyes we see, there is no love for her husband to be found.

“Blue Valentine” can loosely be described as a he said-she said type of story. Here is where the film’s major problem lies: it tries to make us choose who to be sympathetic for. At first, it all seems to be the wife’s fault. Then, it suddenly all becomes the husband’s fault. In the end, it strangely doesn’t acknowledge the problems on both sides and it makes us feel inclined toward only one character. The film could have used a smoother transition, or maybe more of a reconciling.
What drove me to this film, and what might drive many more of you, is the controversy surrounding the film. “Blue Valentine” originally carried a deadly NC-17 rating. After protest, that rating was brought down to an R. The NC-17 came mainly from the sex scenes which are graphic, but not pornographic. They are used not to give the audience some unholy pleasure but rather to show the different stages and feelings of the marriage.
Perhaps its rating was also raised because the MPAA felt that younger viewers would be too disturbed by this film to want to see it anyway. What is to be afraid of? Reality? Anyone who is mature enough to want to buy a ticket for “Blue Valentine” is mature enough to view it.
Share on Tumblr