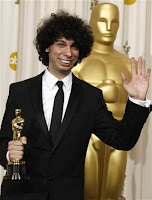 Oh, Academy. You could provide us with some amazing set pieces but this year, you couldn’t give us a great show. Too much nostalgia can’t cover a lack of charm. Not to mention, some undeserving winners.

I can’t be too angry about some of the winners tonight; I knew already that there was no way that “Black Swan” could trump “The King’s Speech.” But really, David Fincher still remains Oscarless? Worst of all, was the loss of “Exit Through the Gift Shop.” I have a feeling that the Academy was too afraid of the chaos Banksy would’ve caused if he won. But now, we will never know what could’ve happened. I bet Banksy wouldn’t have revealed his true identity, but whatever he would’ve planned would have probably made the entire show. And it also would’ve been much more entertaining than once again, having to hear someone yell about bankers being criminals. Seriously Hollywood, thanks for telling me something I haven’t heard a million times in the past three years.
While James Franco and Anne Hathaway are always entertaining and pretty to look at, for some reason, their chemistry just didn’t seem to work. I think it was less a reflection on their work and more a reflection on poor writing. Although, Franco didn’t seem totally there. Though, I would say they had a few enjoyable planned sketches. However, their onstage chemistry just did not cut it.
The highlights of the show were the small, spontaneous moments. One of them was Melissa Leo dropping the f-bomb, apparently the first time in Oscar history. The other great spontaneous moment was Kirk Douglas’s prolonged stay on stage. It might have to do with the fact that the man is almost 100 years old and he suffered a stroke, but there was something ridiculously endearing about it. He seemed more enthusiastic to be there than anyone else. He basically had to be dragged off the stage. Kirk Douglas, please come back to the Oscars anytime you’d like.
Perhaps the funniest planned moment of the night was the auto-tuned music video. It seemed a little more like something that would be on the MTV Movie Awards rather than the Academy Awards, but it was executed in such a way that it came off as actually funny rather than just trying to appeal to a younger audience.
There was truly one thing though that made the Oscars slightly more bearable this year, and it’s a little more serious. It was those montages. Now, usually the overlong tributes drive me crazy (and yes, some of them were still very unnecessary this year). This year though, some of them were constructed in a truly amazing way. The final montage of the Best Picture winners is probably the best the Academy has ever done. Setting the final speech of “The King’s Speech” to perfectly match up with clips from every Best Picture nominee was truly extraordinary. The montage was a reminder of the magic that forms when a truly great piece of filmmaking is assembled.
Even though I disagreed with the big winner this year, the montage reminded me why these movies were especially selected as Best Picture nominees: they each displayed something unique, uplifting, or maddening that could be found nowhere else in cinema this year. As Spielberg put it, the winner could go along with movies like “On the Waterfront” and the losers will go along with movies like “The Grapes of Wrath.” Neither seem like bad places to be.
Find the complete list of winners here.
Note: I just had to make Luke Matheny the main picture for this article. That is probably the best Jewfro in Hollywood.
Also, I unfortunately can’t post that great montage. And I also can’t find the Kirk Douglas clip. Thanks a lot, US copyright laws…