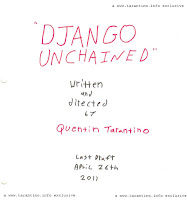 Two posts in one night? I must be crazy. No, this only happens when something truly newsworthy comes along.

The plot for Quentin Tarantino’s next film, entitled “Django Unchained,” has been released today. All that was known before was that it was a slave revenge film. Here is what that actually entails:
Django is a slave who’s liberated by a German dentist-turned-bounty hunter and taught the tricks of the trade by his mentor. Django’s major goal in life is to recover his wife, and to do it he needs to get past the villainous ranch owner Calvin Candie (DiCaprio), who runs Candyland, a despicable club and plantation in Mississippi where female slaves are exploited as sex objects and males are pitted against each other in “mandingo”-style death matches. Candie is a slave’s worst nightmare, and that [sic] is where Django’s wife Broomhilda is an abused slave. [Deadline]

Yes, whenever Quentin says he is making an historical epic, it is not just some historical epic. Earlier this week it was announced that Jamie Foxx would play the lead role. While he did win an Oscar for “Ray,” he also starred in “Booty Call.” Then again, this is from the same director who turned John Travolta into a hitman after starring in “Look Who’s Talking.”

The rest of the cast is enticing. Of course, Samuel L. Jackson will be fantastic, as long as he is given a Bible or some dialogue that he can shout unnecessarily loud. While I have never seen DiCaprio play a flat out villain, his acting has improved with each film he does, so I have a feeling he can do this. As for Christoph Waltz, I have a feeling the German bounty hunter role was written directly for him. And yes, he can act his way out of a paper bag.

For now, it seems too hard to tell what direction this plot will take the film in. Is Tarantino aiming for a classic Grindhouse experience like “Death Proof,” or a classier revenge fantasy like “Inglourious Basterds”?

Something that I wonder even more about, however is what Tarantino will do filming in a time period before movies even existed. In “Basterds,” he was able to find conversation in the films of G.W. Pabst, but what will the 19th century characters of “Django Unchained” discuss? Maybe the characters can sit around a southern manor and discuss the significance of “Moby Dick.”

Whatever he decides to do, I will be there on opening weekend.
Share on Tumblr