Yes, this year’s Emmy nominations include not one, not two, but three horrendous snubs. Well, there are more; but three of them in particular are really bothering me. Only rarely do I cover other mediums besides film, but I figured this was worth it.

Let’s start with the most surprising snub: “Community.” It got absolutely nothing, besides being considered a shoo-in as a nomination for a few categories. I consider “Community” to be the best comedy on television. And if some don’t think it’s the best, then they at least have to admit that it’s the most inventive. What other show has brought back the traditional sitcom format while simultaneously tearing it to shreds? Think about “Paradigms of Human Memory,” in which the show mocked the clip show episode that every comedy has. Yet, instead of showing clips from previous episodes, they showed flashbacks that had never been seen, and acted like we knew all about it. They also went meta with Jesus, and became the second show to make “Dungeons & Dragons” seem cool (the first, of course, being “Freaks and Geeks”). All of this should usually lead to recognition. I guess voters don’t find a monkey named Annie’s Boobs as funny as I do.
To be honest, I wasn’t prepared to write about “Community” in a post about Emmy snubs. In fact, “Community” being snubbed didn’t cross my mind in the slightest bit. However, there were two shows I unfortunately expected to not get a thing: “Bored to Death” and “Archer.”
“Bored to Death” probably could’ve gotten more consideration, had its season been more than ten episodes and ended after Thanksgiving. But that’s part of what makes the show so special: it’s short, and that likely helps the creators focus more on making the show so good. While some shows are forced to churn out over 20 episodes a season, a shorter season allows more time to focus on making each episode nearly perfect.
In its second season, Jonathan Ames’s hipster noir tale of a struggling writer who moonlights as an unlicensed detective found its voice. “Bored to Death” is a rare show that actually benefitted from going more over-the-top than its previous season. It brought out the very best in its characters. And for the record, watching characters solve mysteries while stoned is a lot more entertaining than watching detectives find semen on everything a la every cop show that exists.
“Bored to Death” found an almost Woody Allenesque quality in its satire of all things pretentious. Also, “Bored to Death” is one of those shows that has a formula that it follows pretty much every episode. While following an episode-by-episode formula can sometimes harm even the best of shows (admit it: every once in a while, the structure of “Modern Family” can be slightly tiresome), it never hurt “Bored to Death,” as it still maintained a forward moving plot.
What other nominations were missing from “Bored to Death”? Most unfortunately is the inexplicable snub of Ted Danson as Jonathan’s (Jason Schwartzman) boss, who’s age hasn’t quite caught up to him yet, George Christopher. Danson so eloquently delivered some of George’s most inexplicable and offensive lines. I laughed when he tried to alter the evidence of a negative drug test, and then felt oddly inspired when he decided to quit his job at season’s end. And I am going to say it now, lest I totally forget, that Zach Galifianakis, as Ray, is equally deserving of a nomination. In his season long battle to win his girlfriend back, he proved himself more than just the guy who said “ruh-tard” in “The Hangover.” 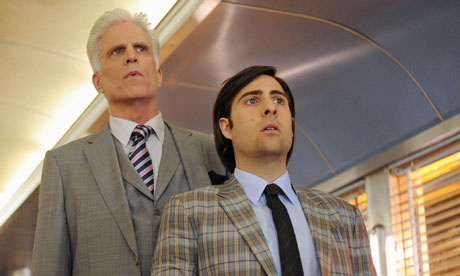 The next show that lost big, like “Bored to Death” and “Community,” improved ten fold in its second season. However, while those two shows became more manic in order to become better, this one surprisingly went the opposite direction. Well, with a few exceptions.
Animated shows rarely get the credit they deserve with the Emmys. Even in its fifteenth season on the air, “South Park” was still brilliant enough to deserve something. I guess Matt Stone and Trey Parker will just have to live with all of the Tonys that “The Book of Mormon” just won. It is “Archer” that really should have made the cut.
This year, “Archer” went from FX’s answer to an Adult Swim show to something entirely different. Yes, it maintained insanity, but it also became a real story, and it did what any good, developing show should do: it focused on its characters backstories. And not just it’s bumbling, womanizing, alcoholic secret agent whose name bears the show’s title; everyone involved became equally important. Season two delved deeper into Sterling’s mommy issues, revealed Cheryl as a millionaire, and made the old servant Woodhouse into more than just some old servant. Throw in some pretty brilliant wordplay (one word: Meowschwitz), and a darkly hilarious cancer plot line, and ISIS becomes the new funniest place to work television. “Community,” “Bored to Death,” and “Archer” may have trouble ever getting their due. Maybe it’s because their styles of humor aren’t just some simple laughs, or maybe its because the popularity of each hasn’t reached their peak yet. I don’t know what it is, but the fact that these shows will be empty handed come Emmy night somehow makes them all the better.
While “Parks and Recreation” got a variety of nominations (including Best Comedy), voters totally left out Nick Offerman, who plays the government-hating government employee Ron Swanson. Swanson is literally the best comedic character on television right now. Why he was snubbed is beyond the act of head scratching.
Share on Tumblr