Who knew that a bunch of perverted, back-stabbing slackers based on the true story that ended in the death of an innocent person could end up being funny?

“30 Minutes or Less” is that movie that asks us to love characters we want to hate. The film never has any trouble “going there” but at a paltry 83 minutes, I can only feel that it reached just half of its potential.
Jesse Eisenberg, plays Nick, perhaps the least likable character in an oeuvre that includes Mark Zuckerberg. Unlike Zuckerberg, Nick has no motivation. He works as a delivery man for a 30 minutes or less pizza restaurant. I’ve never actually seen a 30 minutes or less pizza restaurant in my life, but they did exist in “Dirty Work” and “Spider-Man 2.” In the spirit of those films, Nick can never deliver a pizza on time.
The only person who can stand to be around Nick is his friend Chet (Aziz Ansari), who has advanced slightly farther than Nick has in the world (he is a grade school teacher). Nick is as fast and smart-mouthed as the comedian who plays him, and he likes to be mean to kids. As always, adults making fun of kids is hilarious.
On the other side of the slacker spectrum are Dwayne (Danny McBride) and Travis (Nick Swardson). Dwayne is delusional and psychotic. His view towards women cannot be redeemed by any form of charm. Travis, the more rational of the two, has a slight intelligence that is totally masked by his slow wit. The two of them seem to believe they are characters from “Die Hard,” all while doing unspeakable things to a 3D television.
Dwayne’s father (Fred Ward), a former army major, just wants Dwayne to get out of the house. Conversly, Dwayne just wants him to die so he can have his fortune. So, he hires a hitman (Michael Pena) to kill his father. In order to get the $100,000 necessary to hire the hitman, he kidnaps Nick, straps a bomb to his chest, and forces him to rob a bank. In a panic, Nick reluctantly turns to Chet for help. Chet is not happy about this. After all, Nick did hook up with his sister.
“30 Minutes or Less” is dirty. It is vulgar mostly in the verbal, rather than visual, sense. Strangely, it never gets overwhelming and it never feels forced. It just sounds like people talking with each other.
The film’s casting choices are basically flawless. All of these actors have basically played these characters before, but that doesn’t mean they still can’t play them well. McBride channels his Kenny Powers charmlessness into something very sinister while Swardson plays off the child-like idiocy that helped him steal the show in “Grandma’s Boy.” Eisenberg is often mistaken for Michael Cera. I never understood this, as Cera’s social awkwardness makes him seem sweet while Eisenberg’s awkwardness makes him seem mentally unstable. It works out perfectly here. Eisenberg and Ansari make a great duo, whether they are robbing a bank or slap fighting. 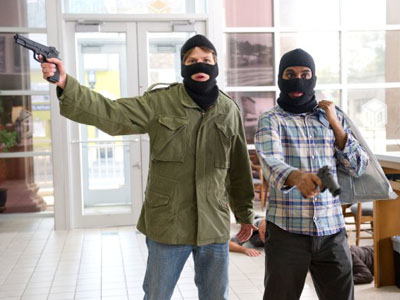 Most uncomfortable comedy focuses on the hilarity of things totally falling apart. Sometimes, that moment before things totally fall apart is so painful that its funny. “30 Minutes or Less” does the opposite: it puts all of its incompetent characters into situations in which failure seems inevitable, and allows them to succeed. Yes, it makes little sense that they were able to hijack someone’s car without getting caught, but its hilarious that they say “thank you” to the person who’s car they steal.
No matter how much I laughed during “30 Minutes or Less,” I had the continuous feeling that something was missing. Most comedies don’t need a very long running time in order to feel complete. “Duck Soup” clocks in at just 68 minutes. A comedy so short should feel like a manic race to make the audience laugh as much as possible rather than a manic race to wrap the story up. While “30 Minutes or Less” is more the latter than the former, it still left so much out. I would have preferred more emphasis on the buddy comedy aspect of the film as opposed to that whole confrontation with the hitman. This might be a mainstream summer comedy, but they didn’t have to stick to plot structure that strictly. The film acts like the bank robbery and closeness to death changed Nick for the best. While things feel different in the end, it still feels as if he didn’t deserve his maturation.
At first, I felt relieved that in its ending, “30 Minutes or Less” didn’t cheat itself as much as the ending of “Horrible Bosses” did (in terms of solving everything with that navigation system). But the film ends with the attitude that money can solve everything. However, this can’t negate the fact that Nick is still an unlikable loser.

“30 Minutes or Less” wants to be a Coen Brothers caper gone wrong filled with lowlifes mixed with the dirtiness of the typical Apatow comedy. However, Dwayne and Travis’s desperation can’t elicit the pity from pathetic desperation. And while the characters in this film are all fun to watch, they possess no redeeming qualities. Perhaps that is fully intended, but not even Nick’s love for Kate (Dilshad Vadsaria) can redeem him at all.
With an all star cast and a promising young director (Ruben Fleischer’s last feature was “Zombieland”), “30 Minutes or Less” had the potential to be a well above average comedy during the summer doldrums. In the end, it turns out to be an average one. It is short, and never too deep. And as Swardson’s Travis would obviously forget to say, “that’s what she said.”
It’s safe to say that Aziz Ansari steals most of the scenes he is in. It would have been nice if they let him throw a few nicknames in though.
Share on Tumblr