Ever since “Arrested Development,” arguably the best sitcom ever put on television, was cancelled in 2006, speculation has been rampant on what will happen to The Bluths next. Creator Mitchell Hurwitz and cast members have hinted at a movie. However, the more they hyped it, the less likely it seemed to happen, and the more fans have been let down.

For the past five years, every time Jason Bateman has been asked about the movie and a soundbite such as “it’s happening” comes out of his mouth, bloggers and journalists alike have been quick to jump on it as evidence that the movie is on its way. But today, cast and crew released some news that actually seems a bit more tangible: ten new episodes of “Arrested Development” will air sometime next year. The movie will pick up where the last new episode left off. This news excited me so much that I accidentally spilled coffee all over my $6300 suit.
Each episode will supposedly focus on each character individually, and where they are in their lives since the show ended. I, for one, think this is a perfect idea, as the movie could now be about basically anything imaginable. It will also allow both the new episodes and the movie to take place in the present. What I hope is that the show keeps its mockumentary style, and that Ron Howard stays on as narrator.
All us loyal fans can do is hope this bit of news is true. If it is not, then the cast and crew of “Arrested Development” will be solidified as the smartest internet trolls of all time.
For any of you who aren’t a loyal fan of “Arrested Development” (and if you aren’t then for your own sake, start watching immediately), you may wonder why we haven’t moved on at this point. Well, it’s for good reason. Every episode of the show packed in so much wit and humor that repeated viewings are the only way to give this show any justice. However, three seasons of the Bluths simply isn’t enough. There can never be enough instances of Gob dancing like an idiot to “The Final Countdown,” Buster forgetting he has a hook for a hand, or Tobias taking the idea of a Freudian slip to the next level. What I’m trying to say is that no amount of “Arrested” puns could some up my excitement for the prospect of new episodes. But that won’t stop me. As the way-too-literal doctor from the show would say: everything is going to be “all right.” And by that I mean, he’s lost the use of his left hand. 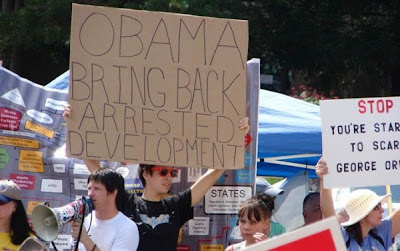 See, Obama actually has gotten something accomplished while in office!
Share on Tumblr