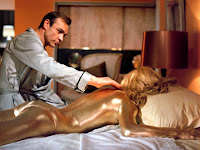 James Bond Marathon (SyFy)
The Bond marathon is a staple of just about every Thanksgiving. You are likely knocking a few back, and desperately wishing you were James Bond. Given that this marathon consists largely of the most recent movies, it will most likely be an excuse for your dad to talk about how everything was better during his day.

Your family is loud, insane, and probably a little dysfunctional. Watching the Bluths lie to each other as they cheat and steal might make you feel a little better about your own dysfunctional family. Watching the many insults of Lucille Bluth will put that racist comment your relative yells about Barack Obama into a lighter perspective. You’ve also seen every episode over 200 times, but you can still find another pun in Tobias’s dialogue every time you watch. And for that, I salute you.
The Godfather Marathon (AMC)
This is a different kind of dysfunctional family story. Here’s if your family enjoys talking about the secret sauce in their cooking, and occasionally killing people. But more likely you enjoy stories about American history as much as your dad; you will also likely be switching between this and the History Channel all day long. You are also probably a movie buff, and drool over the mise-en-scene during the scene in which Michael kills Sollozzo and McCluskey. And for that, once again, I salute you.
The National Dog Show (NBC)
Dogs are more entertaining than cats. There, I said it. Watching this also probably brings up great memories of “Best in Show” for you.
NFL Football: Green Bay Packers at Detroit Lions (FOX)
Thanksgiving wouldn’t make sense for you without football. That, or you just really enjoy watching Detroit suffer (current score: 24-0).
Now, get off the internet and go stuff your faces. Happy Thanksgiving everyone.