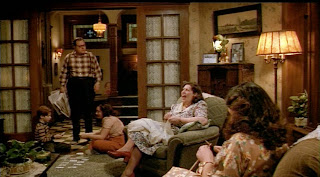 
“Annie Hall.” “Manhattan.” “Hannah and Her Sisters.” I could have gone with any of these timeless Woody Allen classics, so why did I choose “Radio Days”? It wasn’t an attempt to be original (“Annie Hall” is an easy choice, but it is a deserving one at that), but rather that “Radio Days” may just be the ultimate Jewish family comedy, and both a heartwarming and heartbreaking nostalgia trip.

Set during the 1930s and 40s, “Radio Days” is told in a series of vignettes that all connect back to the audio device that once ruled the world. Allen himself is never present onscreen, although he is the story’s narrator. A very young Seth Green is Allen’s stand-in onscreen under the name Joe. Joe obsesses over the radio so much that it starts to concern everyone in his family, especially his father (Michael Tucker). Joe is the youngest in a loud and rowdy household that includes an aunt and uncle and grandparents, as well as a family of Communists that live next door. His Uncle Abe (Josh Mostel, perhaps better known as Principal Anderson in “Billy Madison”) brings home a huge bag of fish everyday and eats them. Raw.

Allen so lively brings about an era in which imagination was king. It’s funny to hear Joe’s parents complain that he’s rotting his brain away by sitting in front of the radio all day, and think that parents said the exact same thing about television decades later.

“Radio Days” is as much about the stars of radio as it is about the listeners. One in particular is Sally White (Mia Farrow) who has a difficult time making it as first, as listeners couldn’t see beautiful face but could hear her voice, which sounds exactly like Lina Lamont’s fingernails-on-a-chalkboard voice in “Singin’ in the Rain.” Luckily, one of these two people was actually able to make it. 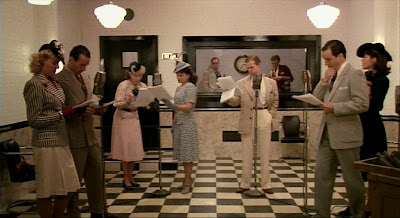 Joe’s family, who spends all their time in Rockaway, and the radio stars, who spend all of their time at fancy parties, never come together. However, the idea Allen wants to bring about is that the radio brought these stars, these stories, into Joe’s living room, and they never left. That is the beauty of radio, of television, and of film: they make the unreal become a very real part of our lives. In that sense, Joe’s family came to life for me and almost felt like my own. However, arguments, while frequent for us, never amount to debating whether or not the Atlantic is a greater ocean than the Pacific.

While the movie’s end is sad in one sense, as the stars of radio realize they will not shine forever, it is also optimistic in that sense. When one star flickers and dims, another one shines, and a new opportunity comes about. Celebrities might not be famous forever, but the art they create makes them immortal.

“Radio Days” is that lasting artifact of Allen’s self-deprecating humor and a prime example of why the king of neuroticism can never be dethroned. While it is funny, it is also so realistic. If you’ve ever had more family members piled into your house than you can count, and you remember it as a terrifying yet hilarious experience, then you should pile every single one of those family members back together in one room and watch “Radio Days.”