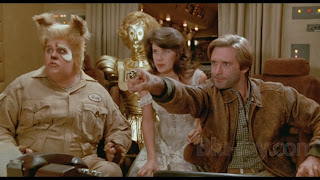 
Unfortunately, the end of Hanukkah has arrived. But even as you prepare to put the menorah away, there is still one more night worth of a movie left. And what better way to end Hanukkah than with a movie by Mel Brooks, the master of Jewish humor, and of randomly inserting Yiddish jokes into his work.

“Spaceballs” satirizes both the “Star Wars” movies, and the general way movies were made in the 1980s. Darth Helmet’s (Rick Moranis) ridiculously gigantic helmet is hilarious enough, but the self-referential nature of “Spaceballs” is what helps to make it a minor work of genius. There is one scene where the characters watch themselves watching “Spaceballs.” Most notably though is the scene where the Yoda-spinoff Yogurt (Brooks) explains the concept of merchandising. Its a hilarious and spot-on scene that should be shown in every film business or marketing class. As a kid, I would really have loved to have Spaceballs the Lunchbox, though.

“Spaceballs” remains a standout, and could teach those supposed movie satires made nowadays (I’m looking at you, Seltzer-Friedberg) a thing or two. My only problem with this movie is that if Princess Vespa (Daphne Zuniga) is a Druish princess, who once had a huge nose pre-plastic surgery, then why do her and Lone Star (Bill Pullman) get married in a Church? I guess it’s just as Barf (John Candy) says: “funny, she doesn’t look Druish.”

Watch this clip, and learn a thing or two about merchandising: http://www.youtube.com/watch?v=xvmZ9SPcTzU