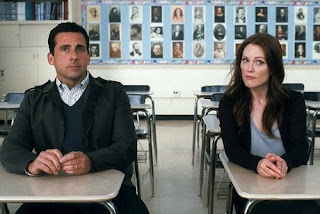 Marketers and advertisers are supposed to fool us into believing that some product, usually an inferior one, is gold. Sometimes though, they fail to make a superior product look good. Point in case comes with “Crazy, Stupid, Love” a movie that perhaps no one knew how to sell, because it doesn’t at all try to be a part of the genre that everyone wants it to be in. But hey, sometimes lying is the only way to make a buck at the box office nowadays.

In a culture of showing everything and giving it all away, “Crazy, Stupid, Love” surprisingly surprised me, and it pulled off a surprising twist that could make even M. Night Shyamalan blush (is that joke still relevant?). “Crazy, Stupid, Love” has something most comedies could use these days: fully-formed characters. The movie starts off as with Cal Weaver (Steve Carell) and wife Emily (Julianne Moore) out at a restaurant. He asks what they could share for dessert, and the first thing she blurts out is ‘divorce.’

Before any of this is even said, it is already clear what is wrong with this marriage. Cal wears a distinctly beat up pair of white New Balance shoes, and typical rectangular glasses made simply to help him read, and not at all to distinguish him from any other man his age. He has been so lost in his marriage that he just lives to function. So little fight is left in him that when Emily wants to talk about things on the ride home, he simply opens the car door and jumps out in the middle of the road. What he barely got a chance to hear about was that Emily cheated on him with her boss (Kevin Bacon, in a subtletly sleazy role).

Following the divorce, Cal lives a sad sack life, and frequents a hip bar that seems too trendy for someone who doesn’t even know what a trend is. Meet Jacob (Ryan Gosling) who is basically a walking male fashion trend. Jacob is smooth in every sense, and can even casually drop some Yiddish into conversation. Jacob leaves the bar every night with a new woman until one day when he decides to drop everything and take Cal under his wing.

Jacob’s idea of changing one’s life around is a complete change in wardrobe. After disposing his New Balances and throwing on a new suit, Cal becomes Jacob’s clone. This leads him to picking up a series of women, one of them being a teacher (Marisa Tomei) who is just as self-loathing as he is. All the while, Cal’s family makes some other stupid mistakes, and his son Robbie (Jonah Bobo) tries to figure out what love is amongst the madness of divorce.

“Crazy, Stupid, Love” works not because it is the kind of romantic movie in which we are forced to root for a bunch of bad people who one day decide to do something good, but rather it is about a bunch of genuinely good people who sometimes act against their better judgement. Cal and Emily’s divorce made me think of “Kramer vs. Kramer” in its honesty and its ability to not pass down judgement onto its characters. Just as it occurs in reality, every action and every reaction has a purpose in the eyes of each person who carries it out. It has a bit of the he-said she-said mentality, but the movie is really about how their broken love affects a wide range of people, and not just the two of them.

I have been a fan of Steve Carell, since his days as a correspondent of “The Daily Show.” He can make anyone fall in love with even the goofiest characters (Michael Scott, Andy from “The 40-Year-Old Virgin”), but he’s never displayed the kind of range he shows in “Crazy, Stupid, Love.” In past roles was he had to make an unsympathetic character sympathetic and here, he has to do the exact opposite. He excels at this challenge and shows some dramatic chops he’s been hiding. Gosling meanwhile, has more dialogue than he had in both “Drive” and “The Ides of March” combined, yet he displays that same ability to play someone who is almost like a blank slate with one defining quality (driving, political knowledge, and here, clothes). He is described at one point as looking “photoshopped” and indeed, he makes Jacob look photoshopped. His transition into relationship man is surprisingly believable, with an extra thanks to Emma Stone, who’s importance to the story has a drastic change towards the movie’s end.

“Crazy, Stupid, Love” is the kind of funny that’s quiet and smooth, with each joke not attempting to be a gag but rather just a part of what anyone in the cast would say or do. The surprisingly refreshing script from Dan Fogelman (“Fred Claus”) gives every single character in the ensemble a purpose. Here is a movie that throws away the idea of throwaway characters and subplots. The movie’s only real flaw is a graduation scene final speech that feels a little too calculated, and while the happy ending feels earned, it ties things together too simply, especially with the cynical tone the movie carried throughout. Then again, for everything the characters went through and how they eventually prove themselves to the audience, maybe they deserved this conclusion.

“Crazy, Stupid, Love” made a mockery of the people who released it, proving that a poorly chosen title and some ads that seem to give away everything don’t necessarily rightfully represent the movie. Watching it made me think of a slightly lighter version of “The Descendents.” Like that other movie, there was a rare, genuine feeling behind the humor of “Crazy, Stupid, Love” that didn’t make me feel stupid for enjoying it, and certainly doesn’t make me feel crazy for endorsing it.