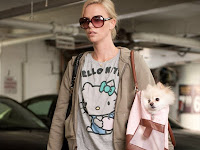 Upon associating the name Diablo Cody and Young Adult Fiction together, the first things that come to mind are words like “yoseph” and phrases like “shut you freakin’ nard, Bard!”. I am not a “Juno” hater like many are, but phrases like these make being hip seem a little bit square. However, upon viewing her latest collaboration with director Jason Reitman, “Young Adult,” I found a writer who is starting to come into her own with her words, and a director who can bring those words to life.

“Young Adult,” like “Crazy, Stupid, Love,” is a victim of bad marketing. It seems the only way to sell a semi-romantic dramedy nowadays is to make it look bright and predictable. “Young Adult” is two things you’d never expect it to be: ambiguous and unpredictable.
The anti-hero of “Young Adult,” Mavis Gray (Charlize Theron), is introduced in a position that we find her in during various parts of the movie: sprawled out face down on a bed, hungover, and watching the Kardashians. There is something about watching the miserable lives of people on reality TV shows that makes a people feel better about their own rotten lives. Gray has become a semi-successful writer of a young adult book series. The peak of her book’s popularity has waned. Despite being 37-years-old, she is more like a girl than a woman (if you want to understand the difference watch this).
Mavis comes from the small town of Mercury, Minnesota. She is living the dream of everyone in Mercury, as she has now moved to the big city (Minneapolis that is, or as Mercurians call it, “The Mini Apple”). Maybe it’s because she’s feeling alone, or maybe because she was still a little drunk from the night before, but an email spreading the news about the newborn baby of her high school boyfriend Buddy Slade (Patrick Wilson) sends her packing her bags (including her Paris Hilton-sized dog) back to Mercury. On her journey back, Mavis has thoughts of returning back to her glory days, of being queen of high school again, and winning the happily-married Buddy back. 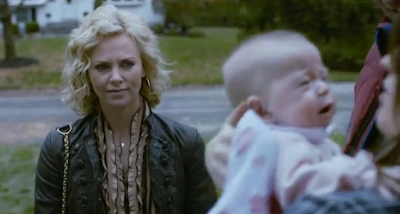 It turns out that Mavis is now more of a Queen Bitch and Mercury is a cookie cutter of small town USA. The town she once knew now includes a Staples and a Kentucky Fried Taco Hut. This is how the Canadian Reitman likes to portray America: a land of excessive brand name dross.
Mavis is now the late 30s loser who used to be cool in high school. Pity, the loser usually isn’t supposed to be the protagonist. That is what makes this story more challenging and ultimately more rewarding: the audience must get over their inhibitions and realize that they must find a shred of humaness inside of a character who seems to totally lack it. Cheers to “Young Adult” for making us stick with a character who is unlikable from start to finish.
The more time spent in Mercury, the less this feels like the happy conclusion to a teen fantasy and more like a horror movie in which wounds are opened and then repeatedly stabbed at. While at her favorite bar, Mavis forms an unlikely friendship with Matt (Patton Oswalt), the former high school loser who became partially crippled after falling victim to a vicious hate crime. Matt now spends his days holed up in house, making action figures in his bedroom and distilling bourbon in his garage. He is the kind of person who should’ve gone farther in life than he did. Oswalt’s Matt is the perfect foil to Theron’s Mavis. This is the performance that will earn him the Oscar nomination he should’ve received for “Big Fan.” Not that he isn’t equally deserving of it here. Comedians can be great actors because they tend to wear their emotions on their sleeves. 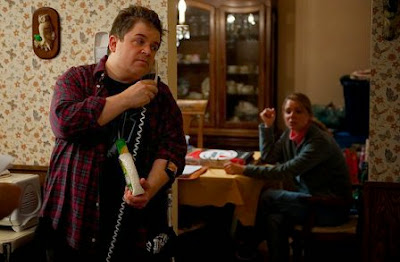 But was Mavis’s life so bad, or was she just looking for more problems to have? As she says at one point, her looks made people think she was perfect and impervious to problems. Everyone has baggage and what really matters is how we handle it.  This message is simple and old as time. But Theron’s nuanced, sometimes funny, and sometimes heartbreaking performance, adds a new dimension to it. Living in the best moments of the past is simply a device to obscure something painful. It is the most powerful form of denial there is. And when a few truths are revealed during the painful yet ingeniously written baby naming scene, it feels like Mavis is learning everything at the same time that the audience is.
Earlier this year, I saw “Bad Teacher” and pondered what a better version of that movie would look like. Well, “Young Adult” is what “Bad Teacher” would’ve been if it actually tried. Making a despicable character the protagonist isn’t necessarily about making them likable enough to give them a pass for their wrongdoings, but rather to make them interesting and three dimensional enough for anyone to want to see what they will do next. It is kind of like watching a train wreck. However, this time, I didn’t want to see the train go off the rails. 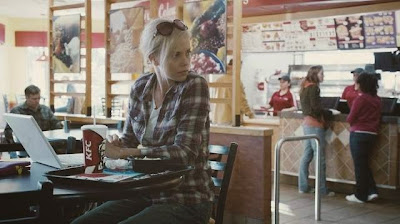 Jason Reitman has always made off-kilter films about characters who make questionable decisions. Whether that be sticking up for tobacco companies, getting pregnant as a teenager, or firing people for a living, Reitman’s four-film winning streak ends not with someone who is bad in what they do for a living, but rather the way they act. With “Young Adult” and his previous feature “Up in the Air,” Reitman begins to turn toward more ambiguous territory; and the more ambiguous he gets, the better his movies become.
“Young Adult” could have gone the cliche way and portrayed a montage of Mavis turning her life around, probably by working out, walking her dog, and going to an AA meeting, but five minutes is not enough time to fully take in somebody turning their life around. The important thing is not how she turns her life around, if she ever does, but that she has learned the lesson she needed to learn. She was a beautiful fish in an ugly pond. That didn’t earn her love, but rather sorrow.
“Young Adult” won’t put anyone in the cheeriest mood this holiday season. However, there is nothing more reassuring in the holiday season than someone realizing what they should be holding dearest in their life. “Young Adult” is a gift of tough love.
Share on Tumblr