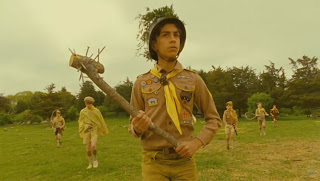 Lately, I’ve been complaining a lot about terrible, no good, misleading trailers for movies. That temporarily ends today, as the trailer for Wes Anderson’s “Moonrise Kingdom” has arrived. Not only does it make this movie look fantastic, but it is most likely showing exactly what we will get, maybe that’s simply because Anderson has a very distinct style of filmmaking. It almost looks like a series of children’s drawings.

I love everything about this trailer. I love the outdated look of it. I love the French soundtrack. I love that it includes a clip of Edward Norton saying the phrase “Jiminy Cricket,” which brings back the use of the phrase “cuss” in “The Fantastic Mr. Fox,” Anderson’s last movie (and one of my favorite movies of the last decade). I love that the rest of the cast includes Frances McDormand, Bruce Willis, and Bill Murray. Seriously can Bill Murray win an Oscar for this role? Just because he’s Bill Murray?

But I digress. Watch the trailer below. Then re-watch it a few more times like I did: