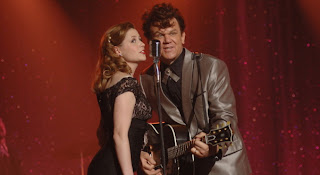 That I had not seen “Walk Hard” up to this point is a mystery even to me. This is the kind of comedy that throws everything at the wall to see what sticks and for the most part, it all does.

“Walk Hard” is somewhere between “Walk the Line” and “Ray” with a dab of every other musician’s life story that has ever been made into a movie. Even The Beatles’ “Yellow Submarine” can be seen in the mix.
“Walk Hard” is basically the typical biopic movie structure in simplest form. It begins as Dewey Cox (John C. Reilly) prepares to go on stage, his face bathed in spotlight. But he can’t go on yet, because according to Sam (Tim Meadows, with some great deadpan delivery), Dewey Cox, “has to think about his entire life before he goes on stage.” Flash to years earlier, when Dewey was just a young boy on a southern farm faced with the childhood tragedy of accidentally slicing his brother in half with a machete. Haunted by accidental murder and his father’s disapproval, Dewey decides to become a musician.

Dewey becomes a sensation with his provocative country jams, which cause some to dance and others to punch priests in the face. He marries Edith (Kristen Wiig), who keeps telling him he won’t be a famous musician even when he actually becomes one. Soon, Dewey will fall for June Carter stand-in Darlene Madison (Jenna Fischer), and leave Edith for her. Dewey’s marriage ends in a reveal that manages to be uncomfortable and hilarious.

One thing I have never really expressed here is my deep admiration for Johnny Cash, and my deep discontent for some of the ways in which Cash’s life is portrayed in “Walk the Line.” The biggest problem I’ve always had with “Walk the Line” is the way in which they demonized Cash’s first wife, and totally abandons her character in favor of Cash’s relationship with June Carter. “Walk Hard” actually does a much better job in judging its character, mainly in what an oblivious idiot he is and how someone like him really can’t function in society.

Knowledge of the history of American music is not required to enjoy this movie, but it would certainly help. When the end of the 1960s rolls around, Cox’s music begins to resembles that of Bob Dylan, prompting the film to briefly mimic “I’m Not There.” After hanging out with The Beatles in India (with uncanny impressions of the Fab Four), he turns into an LSD addict and tries hopelessly to create his opus. The over-the-top orchestra, which includes a few animals, is funnier when you realize that Cox has turned into Brian Wilson when he was making “Pet Sounds.” 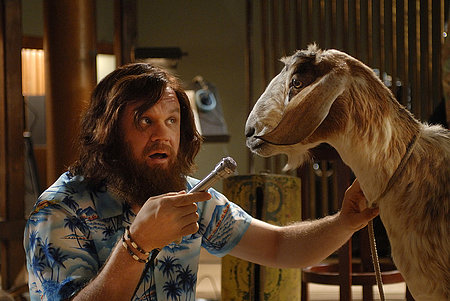 “Walk Hard” does to the biopics of the 2000s what “Spinal Tap” did to the “Behind the Music” documentaries of the 1980s: it skews them by becoming one of them. “Walk Hard” proves what is wrong with the format by following its formula and then reducing each trope to its most basic terms. For example, Meadows’s Sam is the character who is always introducing Dewey to a new drug, first by telling him that he shouldn’t try it, then by telling him how much it will benefit his life to a degree that he can’t say no. Biopics consist of a lot of characters who serve as nothing more than plot points in order to introduce the subject to the next thing that will ruin their life.

Another part of what makes “Walk Hard” work is that it not only talks like a biopic, but walks like one as well. The sets and costume choices all match each time period they are a part of consistently. The Lifetime Achievement Award ceremony seen later in the film looks and feels exactly like a real lifetime tribute to a musician. This goes to show that the only people who can satirize the life of a musician the right way are those who truly admire music. Therefore, it comes off as more truthful than mean-spirited. 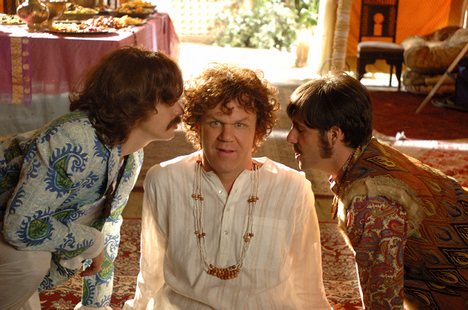 While watching “Walk Hard,” I was frequently reminded of “MacGruber” (released after “Walk Hard”), another genre-mocking genre entry. That movie also went over-the-top at times. However, as seen most prominently in its sex scenes, it served more as a way to knock down everything we hold near and dear in movies. In “Walk Hard,” perhaps the penis that suddenly appears on the side of the scene was meant to make fun of unnecessary gratuitous humor, but in the end, it came off as exactly that. The movie also loses a little steam following Dewey’s LSD rampage.

Despite this, “Walk Hard” delivers the kind of laughs you rarely get, the kind that forces you to stop and recompose yourself. Imitation is supposedly the sincerest form of flattery, and the pseudo-Cash ballads resemble many songs from the Man in Black in ways that only someone who deeply admired his work would know. And if Jack White wants to make a cameo in your movie, then something must be going right.