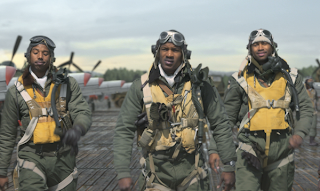 We here at The Reel Deal enjoy making fun of George Lucas a lot. Mainly, we target him for the fact that hokey Naboo sequence for “Attack of the Clones” and the fact that he will be rereleasing “The Phantom Menace” in 3D later this year.

The latest release under the Lucas name is “Red Tails” or as I will call it here, “DubTales” for the absurd soundtrack that has been accompanying its commercials. During Lucas’s interview on “The Daily Show” on Monday night, I saw a side of him that took me off guard: he was forthright rather than pompous. This looked a lot more like the guy who made “American Graffiti” and “A New Hope.”

“DubTales” is yet another movie about the Tuskegee Airmen, the brave African American fighter pilots who, against all odds, took to the sky and fought for America during World War II. Lucas has been working on this movie since 1988, and various people, including himself and Samuel L. Jackson, have been slated to direct. Anthony Hemingway is slated to direct a final script written by John Ridley. Anthony is unfortunately not related to Ernest, but Ridley is credited with the story for “Three Kings,” one of the best war movies ever made. Perhaps he can bring something original to a story that has been told so many times on film.

The story behind the making of “DubTales” is an interesting story itself. According to Lucas, studios were hesitant to finance a story like this. Studios today largely concentrate on foreign box office, as that is where the real money is. It is no longer just about making movies that will appeal to Middle America, but what will appeal to the rest of the world. Instead of doing careful research, the easiest thing to do in order to break cultural barriers is to make movies that have less emphasis on story, and more emphasis on explosions. This explains the existence of the “Transformers” series.

So apparently, an inspirational story about African Americans won’t sell well overseas. I have never conducted a focus group, and don’t know if any were actually conducted to reach this conclusion, but the most perplexing part about this is that even George Lucas can have trouble getting a movie made.

Lucas was not trying to make “DubTales” for a foreign audience. Rather, he is targeting it toward teenage boys, whom he would like to learn more about this momentous story. That explains the Dubstep soundtrack in the trailer. I appreciate his efforts, but adding music like this to a movie about World War II seems wrong. It feels less like finding the right audience and more like pandering. And how could I resist making fun of blatant pandering? Teenage boys should be encouraged to see movies about history, but they should not be the one deciding the way in which they are made.

It is very possible that this ad was just an attempt to grab an audience and not a reflection on the actual film. I have been starting to trust ad campaigns for movies less and less by the day, thanks in part to how the trailers for “War Horse,” “Hugo,” and “Young Adult” represented their respective movies so inaccurately. Trailers are not the selling of the actual product, that is what buying tickets is for. Trailers are meant as a tool for hype, but given that no one seems to know how to represent a movie accurately nowadays, studios should look into heavier use of word of mouth.

I believe George Lucas cares more about the movies he makes than he lets on, and I will consider seeing “Red Tails,” but never “DubTales.”