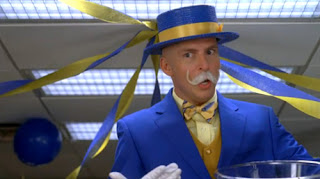 This year is the one in every four years that’s a leap year, meaning February gets one extra day. I don’t remember the last Leap Day very well, but apparently its a new national holiday. It would be next in line for a movie with the caliber of “New Year’s Eve” and “Valentine’s Day,” but “30 Rock” already beat Hollywood to the chase. Don’t forget to wear blue and yellow and thank Leap Dave Williams today.

While a lot of people are deciding to use this extra day to do something spontaneous and unpredictable (I smell a rom-com!), I’ve just decided to write an extra blog post. This Leap Day, you will be treated to a new clip promoting Ridley Scott’s upcoming “Alien” prequel, “Prometheus.” It shows Guy Pearce, Australia’s new national treasure, in character at the recent TED Conference. I am not one to be sucked in to Hollywood’s obsession with sequels and prequels but when I do, it’s for “Prometheus.”

Happy Leap Day to all, and happy fifth birthday to all of my friends turning 20 today. Watch the “Prometheus” clip below, so you can feel educated about Greek Mythology today: