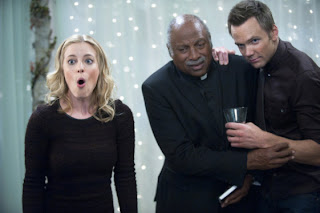 Warning! Some minor spoilers for tonight’s episode. And if you are a community college student then no, you cannot be a pirate as well.

I am not one of the righteous few who has deactivated their Facebook account and returned to reality. Having said that, here are a few reasons why I hate social media: it is addicting, it is causing people to be too concerned about the affairs of others, and it all together makes us more vain and self-concerned.

And here is why I love social media: without it, “Community” might not have been back on the air tonight. I am not in any way taking credit away from the show’s brilliant mastermind Dan Harmon, nor the NBC executives, who are not getting enough credit for continuing to keep this strange little show on the air, despite its low ratings.

However, “Community” was pervasive on Twitter this week. One of the top trending topics the other day was #anniesboobs. The fact that this joke, which only an avid “Community” fan would understand, was that popular, shows its fan base goes beyond what Nielsen can calculate. If they came out today, perhaps the likes of “Freaks and Geeks,” “Undeclared,” and “Firefly” would never have been cancelled.

I have been talking about “Community” a lot the past week, enough so that many people might just want me to stop, as this is supposed to be a site about the movies. To that I counter and say that “Community” is inspired as much by film as it is by television. It puts every pop culture reference that runs through my brain on a daily basis on screen. At times, I have been tempted to compare “Community” to “Arrested Development,” but “Community” truly defies comparison. Every week, it tries to do something that no show on television has done before. It can be hit or miss, but either way, it is the most joyfully ambitious show you will see on television today.

But between intense blanket forts and paintball fights, “Community” is all about its characters. Fittingly, tonight’s episode, entitled “Urban Matrimony and the Sandwich Arts,” was about a grounded return to normalcy. Jeff started the episode complaining, and ended it with a speech. Britta tried to be fiercely independent, Annie was hopelessly romantic, and Pierce was trying to sell something racist. A day in the life at Greendale Community College.

But as always, things were far from normal. Shirley was getting re-married to her husband Andre, and Britta found herself to be a fantastic wedding decorator, despite her hatred of marriage. Meanwhile, Troy and Abed decided to act “normal” for once, only to discover that their weirdness is the only type of normal they could ever be.

In most sitcoms, each character seems to have some assigned role they must fulfill in each episode. “Community” follows that, yet acknowledges it, at the same time. This was proven in “Remedial Chaos Theory” (if you haven’t seen this episode, which has seven separate story lines, watch it immediately). But in tonight’s episode, and I believe it will be a theme for the rest of the season, everyone realized they are not who they thought they were. Pierce is not a businessman, Shirley is not just a mother, and Britta will soon have to say goodbye to her days as “Anarchist Cat Owner.” As Harmon said himself in an article in the New York Times, “Community” is headed into some very dark territory.

Yet, there was still something very right about tonight’s episode. The first half of the season was a mixed bag, with the highlights being the aforementioned “Remedial Chaos Theory” and “Documentary Filmmaking: Redux.” Those are two of the best episodes of “Community” so far. However, the rest of the first half of the season was missing the zany inventiveness and brains of the previous season. It all came back tonight and hopefully, will be here to stay for a while.

I still have no idea how this show will end, but tonight, I got a better idea of where it is headed. I imagine the final shot looking something like that of the series finale of “The Sopranos,” minus “Don’t Stop Believin’.” Hopefully, that finale won’t come for quite a while. I have bright hopes that the six seasons and a movie that Abed once championed will become reality.