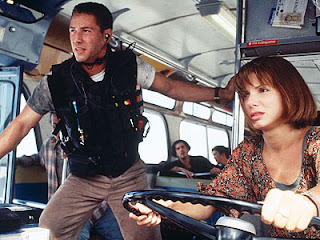 Why Do People Like This is a new segment where I discuss a thoroughly overrated movie.

It is said that “Speed” was pitched as “Die Hard” on a bus. This is one of the most brilliant pitches ever made. Too bad “Speed” isn’t nearly as good as “Die Hard.”

When it comes to movies, I’m like Alvy Singer, in that I won’t see a movie in theaters if I am late. Even two minutes late. I like the credits, too. But it appears that I have broken some of my own rules for “Speed.” I like to justify it by putting into consideration the fact that I caught it on AMC on a Saturday night. AMC is known for playing both classic, and classically cheesy, movies.

In the pop culture lexicon, “Speed” doesn’t usually fall into the second category. In fact, if the ratings on the information option on cable are to be trusted, it gets three and a half out of four stars. So about the same rating as “No Country for Old Men” and “The Social Network.” “Speed” is an entertaining thriller. But a great one? Not even close.

For the longest time, “Speed” was on that list of movies that I am guilty of never watching. That list still includes “Top Gun,” “Trading Places,” and “A Beautiful Mind.” I can now take “Speed” off of that list, and relief washes over me in a wave of meh.

The premise of “Speed” is simple, yet effective: a terrorist plants a bomb inside a bus, and said bus cannot go under 50 miles per hour at anytime, or else it will explode. From the start, I had no clue how that bomb would be diffused. That is what drew me to the movie. Unfortunately, “Speed” goes for the most obvious conclusion possible.

First off, everything about “Speed” is absolutely ludicrous. Now, no movie can ever be truly, fully realistic. Even the ones that claim to be so are usually the most highly implausible (*cough* “Crash” *cough*). But really, are we supposed to believe that a bus can make it over a jump that large? I have never taken a physics class, but even I know that stunt does not look right. Usually in a Hollywood blockbuster, the coolness factor justifies the suspension of reality. This shot might have looked cool in 1994, but it has not aged well.

“Speed” was written by Graham Yost. Yost would go on years later to create “Justified,” which I am told is one of the best dramas on television. But there is something “Speed” lacks in its script. The potential of both comedic and dramatic bonding between the passengers on the bus is passed up so that each of them instead can be used to forward the plot. The only passengers to get some form of personality are Cam from “Ferris Bueller’s Day Off” (Alan Ruck, who should be acting more) and the teacher with the annoying voice from “Donnie Darko.”

And lest we not forget the dull chemistry between the two leads: Keanu Reeves and Sandra Bullock. Bullock is charismatic when she chooses to be; Keanu doesn’t seem to have a choice. When he isn’t busy sitting on a park bench by himself, he is being the lamest actor to ever be called a leading man. Why are we made to root for this hero? What is he overcoming, and what makes him so special? He really should have stuck to movies more like “Bill & Ted’s Excellent Adventure.” Seriously, that movie does not get enough credit.

The end of this movie devolves into a big kiss between the two leads. However, Jack (Reeves) never seemed to be trying to save Annie (Bullock) out of love, but rather obligation. Bullock is able to get the second best line in the movie, when she says she lost her license because of speeding, just seconds after she is asked to take the wheel. The other best line is when Jack says that Howard Payne (Hopper) has “lost his head.” That sentence has multiple meanings.

Hopper is the scene stealer here as the psychotic and mysterious villain. He is strangely less over-the-top here than he usually is, and considering the fact that he once played Frank Booth. The small amount of screen time he gets certainly increases the intrigue in his villain, but I would have rather seen a movie completely about him than about anyone else here.

“Speed” is not completely horrible. There are a lot of thrilling moments and I will admit that I was afraid that the bus would actually blow up a few times earlier on. Then, I remembered if that happened, there wouldn’t be a movie. But that constant fear helps to keep the movie alive. However, this thrill is broken up by a lot of poor character development as well as an incessant need for a happy ending. “Speed” is a lot of great parts searching for a greater whole.

You can catch “Speed” on AMC about the same amount of times that you can catch “Wedding Crashers” and any Tyler Perry movie on TBS. Translation: A lot.