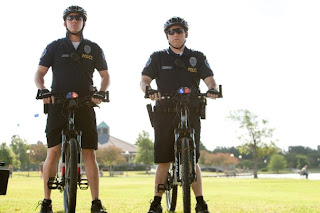 If Hollywood wants to continue remaking movies, then remakes must declare themselves as being one. That helps in making “21 Jump Street,” a modern update of the TV series that made Johnny Depp a star, so good.

Early in the movie, when Chief Hardy (Nick Offerman) is assigning mismatched officers Schmidt (Jonah Hill) and Jenko (Channing Tatum) to a new job as undercover officers at a local high school, he notes that the people who make these assignments lack creativity and instead steal old ideas from the 80s. The studio was truly a good sport on this one.

“21 Jump Street” might as well have been called “Not Another Cop Comedy.” It is more “MacGruber” than “Starsky & Hutch,” with a hint of “Hot Fuzz.” “21 Jump Street” works because it knows all of the beats that a cop comedy should go through, yet it is funny and self-aware at each of them. Call it a post-modernist cop comedy, if you want to be all English major about it.

Schmidt and Jenko go back a long way. In high school, Schmidt was president of the juggling society and Jenko was a jock. Jenko frequently beat Schmidt up. However, they form a tight, unlikely bond at the end of high school and go into the police academy together. Schmidt is always the smart one and Jenko, well, he looks and acts like a cop. Or at least the kind you would see in a movie.

The duo find their lives as cops surprisingly dull; they mainly patrol a park while riding bikes and stop kids from feeding the ducks. The scene of them trying to stop a group of drug pushers shows just how many possible ways there are to make riding a bike funny.

Schmidt and Jenko prove to be hopelessly incompetent as cops. Because of their youthful looks, they are placed in a program that puts under cover cops in high schools, under the jurisdiction of the tough Captain Dickson (Ice Cube). It was Ice Cube’s performance here that made me remember what a good actor he can be, and almost made me totally forget those “Are We There Yet?” movies. But I digress. Anyone who watched the show will already know that 21 Jump Street refers to the abandoned church (not sure how it was in the show but here, they worship some kind of Korean Jesus) where all of the undercovers meet. Schmidt and Jenko are assigned to the same high school they once went to in order to bust the kingpin of a potentially deadly new drug. Jenko can’t wait to return, and Schmidt is quite afraid.

Schmidt and Jenko find out that this is nothing like the high school experience they had. Now, veganism and tolerance are popular. So Jenko has a particularly hard time fitting in, especially when he inadvertently commits a hate crime on his first day.

Schmidt, meanwhile, has a much easier time fitting in. He enrolls in a drama class and takes the part of Peter Pan in the school’s latest production. One of the funniest scenes in the entire movie comes during his audition. Soon enough, he gets in on the cool crowd by befriending Eric Molson (Dave Franco, who shows that talent runs in the family).

“21 Jump Street” is the kind of movie that has been done so many times before, and it knows that. And while the plot beats are pretty predictable, it is the way that the story and all of the jokes are done that makes it a winner. Everyone should know from the start that at least one of them will have a relationship with a student, and at least one of them will pursue a teacher. But what is funny about it the fact that the teacher (Ellie Kemper) is actually the pursuer and the fact that the relationship that forms between Schmidt and fellow drama student Molly (Brie Larson) is actually kind of sweet. I give credit to the stellar screenplay by Michael Bacall, a highly talented writer who is also responsible for “Scott Pilgrim vs. The World” and “Project X.” He has a good ear and eye for the way teenagers talk and act nowadays, the kind that most writers lack. With this movie and the past two mentioned, Bacall has made himself an indispensable comedy writer.

Usually, two directors working on one movie would seem like a bad thing, like the old saying of too many chefs in the kitchen. But Chris Miller and Phil Lord are a dynamic directing duo, and perhaps both of their sensibilities contribute to the very even balance between comedy, drama, and action throughout. Miller and Lord, with the combination of Bacall, hysterically play with audience expectations throughout. They will only blow something up when they feel like it. It is as if they are shouting “F**k You, Michael Bay!” in certain scenes.

“21 Jump Street” serves partially as a vehicle for Channing Tatum’s comedy career. Seriously, who ever thought Tatum could be this funny? This is the same actor who starred in the “Step Up” movies and was once a male stripper. As Tobias Funke might say, “this is ripe for parody!” Tatum is a standout because he is such a great team player, willing to mock his own appearance for laughs. I don’t know if I could ever see him doing standup, but I could definitely see him acting in more movies like this. Mark Maron could make a great WTF Podcast about him.

Perhaps to the shock of everyone, Tatum gives the movie its heart. Despite once being a jock and a bully, Jenko is sensitive and a loyal friend. Think of him as more Troy Barnes than Andrew Clarke.

Tatum and Hill play off each other well, and they gave me enough reason to want to see the sequel mentioned at the end that may have only been a joke. This is the rare occasion when I actually would not mind seeing a comedy get a sequel. That is, as long as they don’t “Austin Powers” it and make it exactly like the original. If there were to be a sequel, I would hope there would be more scenes with Offerman’s police chief, who is criminally underused here. I suspect that many of his original scenes had to be left out during editing.

I find much joy in the financial success that “21 Jump Street” has had at the box office, and by the end of next week, it will likely cross $100 million. On the one hand, this could drive studios to continue on the sequel/remake trend as an alternate for producing original ideas. Or, this will make them realize that what truly makes a good comedy (or a good movie, in general) is to take a lot of risks, and hire a good writer. “21 Jump Street” is not a short movie, and a large chunk of it involves Schmidt and Jenko going through the side effects of a drug over the course of one day. Yes, it becomes totally necessary that we see the disgusting way in which they try and expel the drug from their bodies. A stupid comedy with a few laughs will do well its opening weekend, break even, and then be totally forgotten about. One that is as funny as “21 Jump Street” will merit repeat viewings.